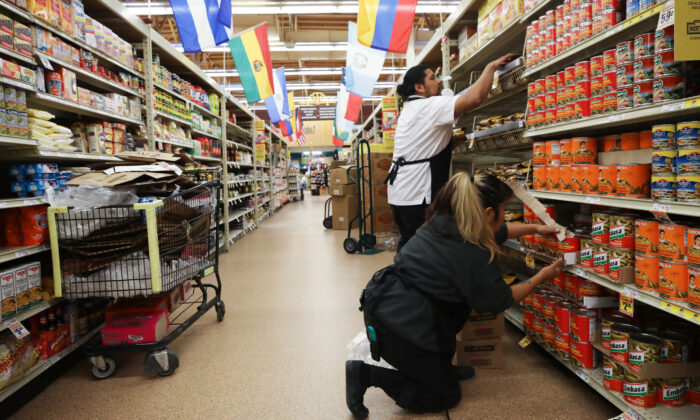 Sentiment among American consumers fell in early January, with the University of Michigan’s monthly confidence survey blaming the decline on pandemic worries and concerns about high inflation.

The University of Michigan’s Consumer Sentiment index fell to a reading of 68.8 in January from 70.6 in December, bringing the gauge closer to November’s level of 67.4, which was the lowest in a decade.

“While the Delta and Omicron variants certainly contributed to this downward shift, the decline was also due to an escalating inflation rate,” Richard Curtin, the survey director, said in a statement.

Consumer price inflation climbed to 7 percent in the 12 months through December, the fastest pace since June 1982. While average weekly earnings rose 4.7 percent within the same time frame, the higher rate of inflation means those income gains have been more than erased, putting real wages well in negative territory and at their lowest reading since 2011.

Curtin said that 48 percent of consumers expect that inflation will continue to outpace wage gains and generate negative levels of real income growth in 2022.

Since inflation affects lower-income earners more acutely, the University of Michigan’s sentiment gauge fell 9.4 percent among households with total incomes below $100,000, a far sharper drop in confidence than the 2.5 percent decline in the overall polling sample.

Twice as many households with incomes in the bottom third compared to the top third said their financial situation had deteriorated, the survey showed, with the erosion of living standards due to inflation given as the chief explanation for the decline.

“Three-quarters of consumers in early January ranked inflation, compared with unemployment, as the more serious problem facing the nation,” Curtin said, adding that confidence in government economic policies is at its lowest level since 2014.

Charles Mizrahi, financial expert and author of “Wall Street Profits for Main Street Investors,” told NTD’s “Capitol Report” that the Biden administration is partly to blame for the surging prices.

“The real situation here is that Washington has not been acting fiscally responsible since the Biden administration took over, in terms of trying to flood the market with more liquidity, which is driving up prices even more, because now you have a whole lot of dollars chasing a whole limited supply of items, and prices are rising,” Mizrahi said, adding that he believes inflation will be a key theme impacting the outcome of the midterm elections.

Curtin said it’s a challenge for policymakers to gauge the right mix of monetary and fiscal policies at a time of pandemic upheaval.

“The most crucial and difficult task will be defusing the developing wage-price spiral,” he said.

Americans’ expectations for what inflation will be one year from now remained stuck at a record high for the second month in a row in December, according to the latest survey from the New York Federal Reserve, which also showed households anticipating a historic boost in earnings.