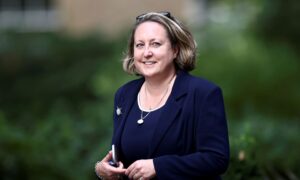 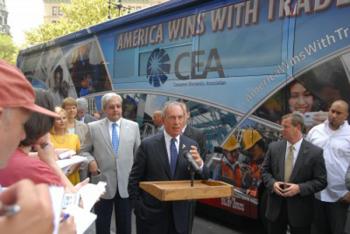 Mimi Li
View profile
Follow
biggersmaller
Print
NEW YORK—According to a recent CNN/Opinion Research poll, a majority of Americans believe that foreign trade is a menace to the economy. But the Consumer Electronics Association (CEA) won’t let that statistic stop it from launching its grassroots “America Wins with Trade” Campaign on July 21 in New York City, kicking off a 28-state bus tour that will help educate Americans on the benefits of trading with other countries.

CEA, which calls itself the “preeminent trade association promoting growth in the $161 billion U.S. consumer electronics industry,” is trying to reverse the wave of anti-trade sentiment that is rolling across America and believes that America could benefit from bilateral trade agreements, the elimination of non-tariff barriers, and strong enforced trade agreements.

"Trade isn't just vital to our companies and our industry, it is essential to preserving America's prosperity and way of life. Our political leaders have told us to make the case to the American people why trade is vital to our nation’s future, so we are launching this nationwide effort,” said CEA President and CEO Gary Shapiro. “It is fitting that we start our 28-state tour in our nation’s financial capital, New York City, which represents the power of trade and free markets.”

According to the CEA and Shapiro, the consumer electronics industry is responsible for more than $1.4 trillion in revenue and 4.4 million jobs.

"The facts demonstrate that trade creates millions of American jobs and provides billions of dollars to our economy. When America competes in the global marketplace, our nation's economy and workers win," continued Shapiro. “The success of our consumer electronics industry in the United States and around the world is proof that the fear-mongerers and naysayers are wrong about trade. It’s vital that we take this message to the people.”

The next stop of the CEA “America Wins with Trade” bus tour will be in Washington, D.C. at Capitol Hill on July 24. There, the CEA will push Congress to loosen trade restrictions and form lasting trade agreements that can help the American economy.