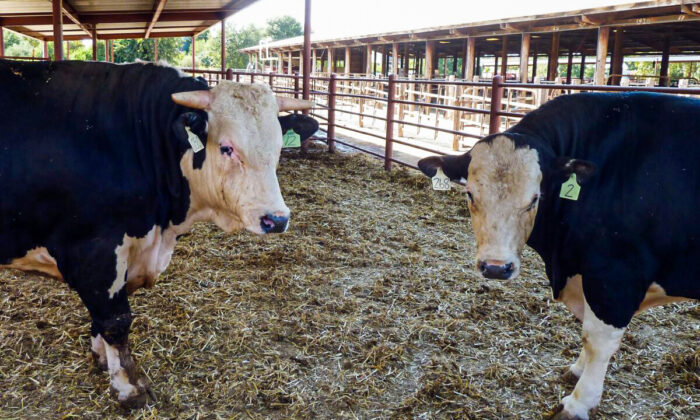 The hornless offspring of a gene-modified bull (right), alongside a horned control cow, are seen at the farm, at the University of California-Davis on September 4, 2019, in Davis, California. (Juliette Michel/ AFP via Getty Images)
UK

The British government says its plan to legalise gene-editing in animals and plants for food is following the science and will help ensure food security. But critics say profits are driving what they call “frankenscience” and warn consumer confidence could be hit.

The new Genetic Technology Bill, the government says, will allow the creation of drought- as well as pest-resistant and nutrient-enhanced crops, reducing waste and the use of pesticides. It argues only genetic changes which could have been produced through conventional breeding methods or natural processes will be fast-tracked in the lab for consumption.

But the bill, which has been broadly welcomed by the farming community, has provoked protests from advocacy groups and animal welfare organisations opposed to the development and marketing of animals with “edited” genes.

The bill will not apply to Scotland and Wales.

In its detailed report in response to the public consultation on gene editing last year, the union Unite warned the plans had the potential to damage consumer trust and cause chaos in the uk food and agriculture industry.

The union—which counts agricultural workers among its membership—pointed to the fall-out from crises in the food supply chain it said had been motivated by short-term financial gain including BSE in the 1990s and “horse-gate.”

The first arose after sheep and cattle remains were added to animal feed. In the later scandal, exposed in 2013, horse meat was found masquerading as beef in processed meals from lasagne to sausages in schools, hospitals, and commercial outlets.

Commenting on those concerns, David Spencer, professor of economics and political economy at Leeds University Business School, told The Epoch Times he questioned what was driving the proposals.

“Businesses and the government can pick and choose experts to justify their policies and practices. And that would worry me if policy and practices are driven by short-term gains.

“Why are firms wanting to adopt this? Because it can reduce cost, improve yields, it can make more profit, and the danger there is that it’s for the short-term, but then we end up in a BSE-type crisis.”

In the BSE disaster, eating infected meat was linked to variant CJD, a fatal degenerative brain disease in humans. One hundred and 78 people died, millions of cattle were slaughtered, and British beef was banned in the EU for a decade. Japan only lifted its ban in 2019.

For Spencer, the general move away from meat-eating, whether people can make an informed choice, and the price of food amid the cost-of-living crisis, could all influence how people respond to the prospect of eating gene-edited fare.

‘Government Ignores Shoppers, Voters, and Eaters at Its Peril’

Pat Thomas, director of Beyond GM, heads an advocacy group seeking a wider debate on genetic technology in agriculture. She told The Epoch Times she was concerned members of the public are being excluded. Thomas explained her organisation used Freedom of Information (FOI) requests to find out more about how the government engaged with its own public consultation on gene-editing.

“The FOI documents that we received indicate to us that the Department for Environment, Food, and Rural Affairs [DEFRA] made extensive efforts around the ‘coding’ of responses from citizens in order to remove as many of these as possible by calling them campaign responses,” she said.

Thomas claims 52 percent of such responses were removed. To rectify this, Beyond GM has called on the government to involve members of the public in the advisory panels recommended by the bill.

“The public is fed up with not being involved in decision-making around their food-systems,” said Thomas. “The government ignores the views of shoppers, voters, and eaters at its peril.”

With no plans in the bill to label gene-edited foods, Thomas thinks supermarkets, yet to commit publicly to selling them, are waiting to see how consumers react.

John Hall, a leading salad grower on the south coast of England who has supplied major supermarket chains including Waitrose and Sainsbury’s, thinks gene-editing has the potential to do good. “What would happen if we could find a gene-editing way of dealing with cancer in humans? The vast majority would say let’s do it.”

But when it comes to using the technology on farm animals and livestock, Hall told The Epoch Times he does not have enough information and thinks many people feel the same.

“In my mind, the arguments are not as clear as for plants, fruit and vegetable, wheat, grain, and rice, the major food crops that will sustain the world.

“If you just went down the gene-editing in plants, I think you’d get a lot more support. If the politicians try to rush this they could find themselves with a massive backlash.”

DEFRA said the technologies it is proposing are safe and it is introducing regulatory measures to safeguard animal welfare.

DEFRA also said it conducted a detailed analysis according to established approaches, taking account of all responses, in its consultation with the public.

It further said it consulted with independent experts on the Advisory Committee on Releases to the Environment (ACRE), whose view is that “precision-bred” organisms do not pose any greater risk than those produced through traditional breeding methods as supported by the Royal Society.

ACRE members are appointed by DEFRA together with ministers from the devolved administrations.

DEFRA declined to comment when contacted by The Epoch Times.