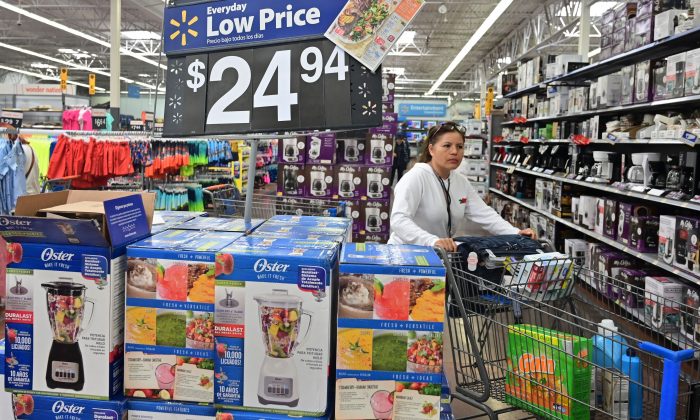 A woman shops at a Walmart Supercenter store in Rosemead, Calif., on May 23, 2019. (Frederic J. Brown/AFP/Getty Images)
US News

Confidence in U.S. economic conditions increased in May, recovering from a dip at the beginning of the year.

The Consumer Confidence Index increased to 134.1 in May from 129.2 in April, according to data released on May 28 by The Conference Board, a think tank that creates the index from a survey conducted by Nielsen, a global performance management company.

“Consumer Confidence posted another gain in May and is now back to levels seen last Fall, when the Index was hovering near 18-year highs,” Lynn Franco, senior director of economic indicators at The Conference Board, said in a May 28 release.

“The increase in the Present Situation Index was driven primarily by employment gains,” Franco said, also adding that “consumers expect the economy to continue growing at a solid pace in the short-term, and despite weak retail sales in April, these high levels of confidence suggest no significant pullback in consumer spending in the months ahead.”

The job market appears to be the strongest part of the economy. Payrolls expanded by 263,000 jobs in April and the unemployment rate dropped to 3.6 percent, the lowest in almost 50 years.

The job gains are all the more optimistic given the modest inflation, as the Consumer Price Index rose by 2 percent April-to-April.

“As long as job growth is strong, that is the green light we need to keep consumers moving along,” said Jennifer Lee, a senior economist at BMO Capital Markets in Toronto.

Consumers anticipated inflation would remain muted over the next 12 months. The survey’s one-year inflation expectations fell to 4.4 percent in May from 4.6 percent in April.

The gross domestic product grew at a 3.2 percent annualized rate in the first quarter, driven by a surge in exports and inventories, quickening from the October–December period’s 2.2 percent pace.

After a sluggish recovery from the 2008 recession, the economy has been in an upward swing, especially in the past two years, accelerated by Trump’s cutting of taxes and regulations.

The Trump election itself seemed to have infused optimism into the economy. The Consumer Confidence Index jumped 8.6 points in the election month of November 2016 and had risen 33.3 points by May 2019.

Consumer confidence doesn’t appear to have been affected by the U.S.–China trade spat as Trump raised existing tariffs on $200 billion in Chinese goods to 25 percent from 10 percent on May 10, prompting Beijing to retaliate with its own levies on U.S. imports. The confidence survey, however, was taken on May 16, not giving the respondents much time to process any potential impact.

“At this stage, consumers are nonplussed,” said Tim Quinlan, a senior economist at Wells Fargo Securities in Charlotte, North Carolina.

Other data on May 28 showed a further moderation in house price inflation, which could help support the housing market.

“A variety of different measures of housing activity have been soft in recent months despite the recent decline in mortgage rates and if affordability issues are weighing on the housing market, house prices could continue to soften moving forward,” said Daniel Silver, an economist at JPMorgan in New York.

The S&P CoreLogic Case-Shiller composite index of home prices in 20 metropolitan areas increased 2.7 percent in the 12 months to March after rising 3 percent the prior month. In another report, the Federal Housing Finance Agency (FHFA) said its house price index rose a seasonally adjusted 4.9 percent in March from a year ago. That followed a 5.1 percent gain in February.

The FHFA’s index is calculated by using purchase prices of houses financed with mortgages sold to or guaranteed by mortgage finance companies Fannie Mae and Freddie Mac.