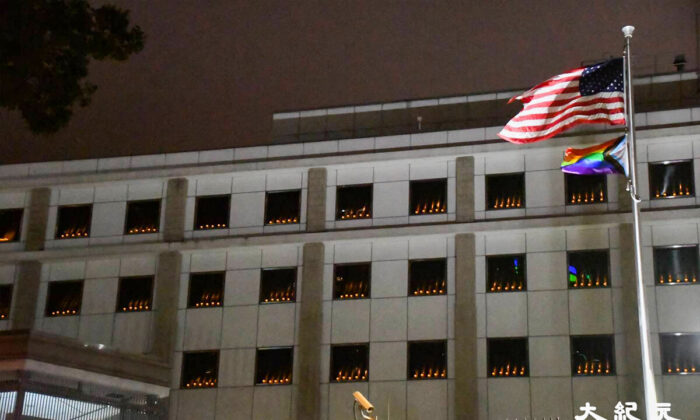 On June 4, 33 years after the Tiananmen Square Massacre in Beijing, the U.S. Consulate in Hong Kong and Macau lit candles on its windowsills. (Song Bilong /The Epoch Times)
Chinese Regime

In Hong Kong as in mainland China, any commemoration of the atrocity faced a crackdown by authorities. Many foreign consulates in Hong Kong lit candlelights and posted messages on social media to mourn the victims of the massacre, while expressing concern about the denial of Hong Kong people’s right to peaceful assembly.

Some Hong Kong media quoted sources saying that the Chinese Communist Party (CCP) had pressured the consulates not to speak on the issue, but to no avail.

According to Ming Pao, the Office of the Commissioner of the Chinese Foreign Ministry in Hong Kong put pressure on governments to self-censor and not take a position, threatening potential consequences for bilateral relations.

In the morning of June 4, the U.S. consulate general in Hong Kong and Macao changed its official Facebook cover image to a photo of the removed Pillar of Shame, which was once erected at Hong Kong University.

Two hours later, the page forwarded a statement from U.S. Secretary of State Anthony Blinken, who said, “Today, the struggle for democracy and freedom continues to echo in Hong Kong, where the annual vigil to commemorate the massacre in Tiananmen Square was banned by the PRC and Hong Kong authorities in an attempt to suppress the memories of that day. We will continue to speak out and promote accountability for PRC atrocities and human rights abuses … we will not forget June 4.” The full text of the statement was published by the State Department.

That night, the U.S. consulate general filled every window sill with digital candles and posted pictures on Facebook with the phrase, “We remember.”

The European Union’s office in Hong Kong and Macao also posted pictures of candles on Facebook to mark “the 33rd anniversary of the #TiananmenSquare crackdown,” adding, “The European Union always stands in solidarity with human rights defenders across the globe.”

The Facebook page of the German Consulate in Hong Kong reposted the picture from the EU office in Hong Kong and Macau, followed by a statement from Luise Amtsberg, Germany’s commissioner for human rights policy and humanitarian assistance.

“On this day 33 years ago, the Chinese pro-democracy movement was brutally crushed,” Amtsberg said in the statement. “Today, my thoughts are with the largely young victims, who peacefully fought for reforms, freedom, and democracy. And with their families.”

Amtsberg also noted that public remembrance of these tragic events is still prohibited in China by the CCP.

“Even in Hong Kong, this now prosecuted,” he wrote. “That is why it is all the more important that we remember, so that this dark chapter is not repeated. Sadly, the human rights situation in China continues to get worse.”

The Australian Consulate general in Hong Kong and Macao also posted on Facebook a tribute to those killed in Tiananmen Square on June 4, 1989, saying, “Australia’s commitment to universal human rights is enduring. We continue to stand for every person’s right to freedom of expression, association, political participation, and religion or belief.”

The New Zealand Consulate General in Hong Kong and Macau said in a Facebook post that “New Zealand remains deeply concerned by the loss of rights and freedoms in Hong Kong, including the right to peaceful assembly in remembrance of the events of 4 June 1989.”

The Consulate general of Canada in Hong Kong and Macau posted on Facebook pictures of the June 4 candlelight vigil held at Victoria Park in Hong Kong in 2017.

“We all have the responsibility to uphold human rights and universal freedoms,” the post reads. “Today, Canada joins Hong Kong and the international community in solemn remembrance of the tragic events of #June4, 1989, when peaceful demonstrators were violently suppressed in and around #TiananmenSquare.

“Assembling peacefully is a human right, Canada stands with all those prevented from exercising their rights.”

In Beijing, the Canadian Embassy posted pictures of candlelight vigils on Twitter in tribute to the demonstrators. “We remember #June4 , 1989 #六四33周年 ,” the post read. “We honour the peaceful protesters who tried to make their voices heard. We will not forget #TiananmenSquare”

On June 5, the Canadian Embassy in China posted on Twitter a picture of a lit candle, which was previously posted on the Canadian Embassy’s official Weibo page. The post explained that in the morning of June 4, the embassy had posted the picture on Weibo remembering #Tiananmen, yet “the post was visible to Chinese netizens for only 10 minutes before being removed by censors.”

For 30 consecutive years from 1990 to 2019, tens of thousands to more than 100,000 Hong Kong residents attended the June 4 candlelight vigils in Victoria Park. Before the implementation of the Hong Kong National Security Law in 2020, the authorities banned June 4 rallies in Victoria Park on the grounds of epidemic. However, thousands of citizens still entered the park and lit candlelight vigils. The authorities later charged 24 pro-democracy activists with “inciting others to participate in an unauthorized assembly” and sentenced them to prison terms ranging from 4 to 14 months.