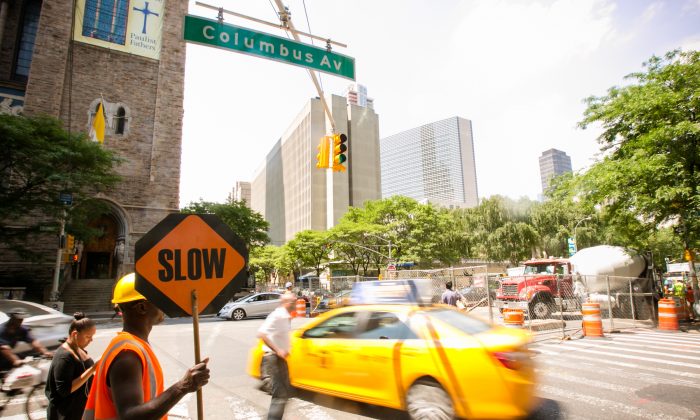 The intersection on Columbus Avenue where Cathy Lord was ran over by a taxi, in Manhattan, on July 1, 2014. (Edward Dai/Epoch Times)
Crime and Incidents

NEW YORK—Fast-thinking construction workers saved an elderly woman on a bike from the jaws of death Monday morning by lifting a three-ton taxi off her body and pulling her to safety.

The woman was taken to Bellevue Hospital with multiple fracture injuries, but is in stable condition, according to her church on the Upper West Side.

“We were having coffee and I saw a cab in the middle of the walkway, and I saw her sneakers underneath,” said Marcos Loyola, 60.

Loyola works at the construction site at 60th Street and Columbus Avenue where the accident occurred. A former paratrooper and the father of a New York police officer, Loyola realized that the cab driver noticed there was something under the car and was about to back up over the woman.

“I put the fear of God in him so he wouldn’t back up,” said Loyola of the colorful warning he shouted to the driver as he ran to help the trapped victim.

He grabbed his co-worker, Joe Delfino, 34, on the way for help, knocking Delfino’s coffee over in the process.

“We lifted the car up,” said Delfino. “It was either back up the car and crush this woman to death, or get the car off her.”

Aided by several other construction workers at the site and a few bystanders, they managed to lift the car enough so that Loyola could pull the elderly woman out. A doctor who was passing by also attended the scene.

Loyola said that at one point he heard the victim talking and realized she was alive, conscious, a woman, and elderly. The extreme tension of the moment wasn’t enough to make him crack, but the sound of the woman’s voice almost did the job.

“I heard her saying, ‘my purse and my glasses!'” recalled Loyola.

Both men were back at work Tuesday without any injuries. Of their decision to help, they said it was simply the right thing to do.

“We looked around afterward and there were a lot of people hesitant to help,” said Delfino, a father to two small children. “That’s your grandmother, that’s your mother. I would hope that somebody could do the same thing for me or my children if they needed help. The world is round.”

“They were cowards,” he said of the bystanders who just watched, but didn’t help. As a father, Loyola said he believes firmly in setting an upright example. “Whatever you do in life, you pass that on.”

CLARIFICATION: This article has been edited to protect the identity of the woman trapped under the taxi.