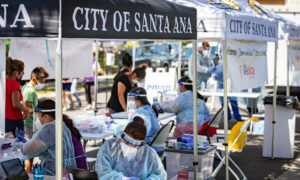 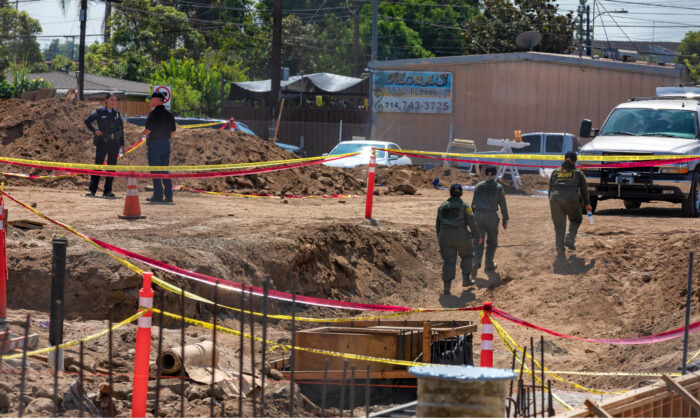 Construction of the maintenance yard for the Orange County Transportation Authority’s first modern electric streetcar was underway when police received a call at 10:47 a.m. about human bones discovered at the site at 2008 West Fifth Street.

“The first priority is to try to locate all the bones, and that’s the process they’re going through now,” Bertagna said.

While building the streetcar maintenance yard, the project’s assigned archaeologist at the site discovered the unearthed bones around six feet below ground and immediately contacted the police, he said.

“They had an archaeologist assigned to the project. He said, ‘Those look like human bones.’ So they called us,” he said.

“Our crime scene investigators went out there. They said, ‘Yeah, those look like human bones.’ That’s when our detectives and the coroner responded, and the coroner confirmed [it].”

Bertagna said construction had been stopped while detectives investigated whether a crime was involved.

Detectives are working in conjunction with the coroner, who is under the authority of the Orange County Sheriff’s Department, to determine the origin of the bones.

He said the job of the detectives is to determine whether a “criminal act” took place.

“Once they recover all the bones, the coroner will take the bones to their office, and they’ll do … DNA testing,” he said.

He said the coroner will check the bones for “obvious signs” of trauma to determine whether they may have been “the victim of a stabbing or shooting,” or whether “this individual just died and they were buried there.”

“They have no clue. I mean, this is like a clean slate. We have bones, now we have to figure it out,” he said.

If detectives determine that a criminal act occurred, they will then submit the case to the district attorney.

“The motive’s not always solved in their investigation,” Bertagna said.

The electric-powered streetcar line will run between Santa Ana and Garden Grove. It is scheduled to open in 2022.