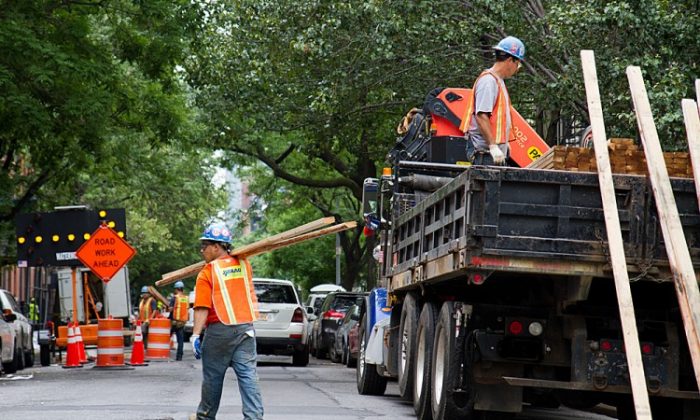 Clinton resident James Cocroft stands outside the 21st Century Gourmet Deli at the corner of 48th Street and 10th Avenue on May 30. The cross streets are at the start of a new five-year construction project, which has some residents concerned. (Benjamin Chasteen/The Epoch Times)
US

NEW YORK—Residents in the Clinton/Hell’s Kitchen area of Manhattan will soon be contending with the sights and sounds of a major construction project to fix the city’s aging water pipes, and they are bracing for a long five-year disruption to their lives.

Preliminary work—which involves extending a water shaft from about 325 feet where it currently meets the old underground water tunnel, to 450 feet, where it will be hooked up to a new tunnel—began on 48th Street east of 10th Avenue on Tuesday with workers drilling test pits. Heavy construction is expected to begin by mid-June or early-July on 48th Street between 10th Avenue and Broadway.

The 48th Street project is one of 11 planned projects in Manhattan that will connect water pipes to the main tunnel.

The project is expected to be complete by spring of 2017, or in 2,005 consecutive calendar days according to a New York City Design and Construction (DCC) report. Residents are worried about how long the disruptions to their lives will take.

“Everybody is concerned. It is going to be a very long process,” said Elke Fears, president of the West 47th/48th Street Block Association Wednesday.

The construction will not affect every street for the entire five years, but the hassle of noise, traffic congestion, and the stirring up of vermin living underground in the neighborhood is still unsettling to residents.

“They are just everyday kinds of concerns that anybody would have that is going to have their street opened up,” Fears said. “It is not just laying a tiny little pipe. It is a huge project.”

Contractors have been given permission to work from 7 a.m. to 10 p.m. Monday through Friday and 8 a.m. to 6 p.m. on the weekends, although the DCC said the work would typically cut off at 3:30 p.m.

The prospect of having more construction noise in the area is not something local resident James Cocroft is looking forward to. He lives just west of 10th Avenue on 48th Street and has been dealing with the sounds of multiple construction projects during his seven-year tenure in the area.

“It is very stressing and actually it gets quite tiresome. You don’t even realize, just trying to combat that noise and try and focus,” Cocroft said near 48th Street on Wednesday.

The noise pollution may not only be coming from the construction machinery, but also from angry drivers, honking their frustration with limited lane access. Avenues 8th, 9th, and 10th, will be reduced to three lanes in certain stretches and 48th, 49th, and 51st streets will be reduced to one lane during working hours.

Perhaps the most unsettling construction side effect is the anticipation that the underground digging will stir up the vermin living underground. Fears said parents who frequent the Hell’s Kitchen Park have already noticed an increase in vermin after Con-Edison recently did underground work.

“You are going to have rats, everyone says, but you want to be able to have it to a degree that is manageable,” Fears said.

The DDC has hired two contractors to help exterminate the vermin. A spokesman with DDC said they will monitor the situation throughout the project and will move their baits to problem areas as they arise.

At a forum in November, residents spoke passionately about the impending underground work, with some even threatening to move. But as the project begins, residents are taking their situation a little lighter.

Most residents agree the work is necessary. “We all understand that we need new water pipes and we need a new tunnel. This is for the city, it is for everybody.” Fears said. “It is just doing it with the least bit of disturbance to our quality of life.”

In an effort to keep relations smooth with residents, the DDC added an on-site liaison to help people with their concerns. Residents with issues can email the liaison, Nadine Harris, directly at w48thstreetccl@gmail.com instead of going through 311.

Cocroft is glad for the opportunity to speak with someone face-to-face. “You could actually go and shake someone’s hand and talk to them and maybe take a walk and show them: this is the noise level,” he said.

“They have to lay down the infrastructure,” Cocroft said. “It is a necessary evil. It is one we welcome—but not while it is happening,” he added with a smile.

Fears said, “We are just hopeful that they continue to reach out to the community,” adding with a laugh, “and that it will go quickly.”