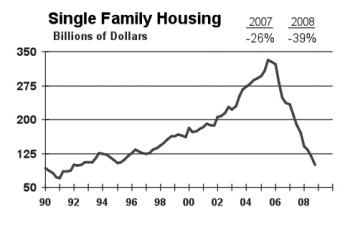 Analysis of Construction Past, Present, and Future

Robert Murray, vice president of economic affairs at McGraw-Hill Construction, shared his knowledge of trends in the industry at a conference last week. The conference, hosted by McGraw-Hill, focused on the impact of the financial crisis on the construction industry in the United States. Below are graphs showing trends of the major areas of construction over the past 18 years. The data pertains to construction starts in billions of dollars.

Spending on construction starts for single family housing (stand-alone houses and townhouses) was down 26 percent in 2007 and fell a further 39 percent last year—a sharp decrease following around 15 years of steady positive movement.

Murray’s take: “Single family housing is still in decline … the general view is that it will probably [bottom out] mid-way through the end of 2009. I would say focus on renovation work and certainly there might be a boost coming from the stimulus bill, that provided five million dollars for home weatherizations.”

The construction starts for commercial buildings has run in cycles, although the graph shows a sharper decline recently. A drop of 25 percent in 2008 from more than $100 billion, down to less than $80 billion has hit the industry hard.

Murray’s take: “The most overbuilt commercial category this time around has been retail. The prospects for retail bouncing back soon are not good … It's going to be a tough year for commercial building, there's no question about it. And probably the first part of 2010, maybe all of 2010.”

Rising shakily over the past 18 years, money spent on construction starts for the institutional building (e.g. hospitals, schools, churches, etc) industry still looks positive, although short-term dips appear to be the trend.

Murray’s take: “The important thing is that in a period of downturn, the institutional side of the building market is less vulnerable than commercial construction … I think institutional-related projects—whether it is schools, or universities—perhaps they have been rethought and postponed for a bit, but I would say the chance of them being indefinitely postponed are not as severe as what you would see for, let's say, another high-rise condo building.”

Public works, including transport, water, and power spiked in 2007, reaching around $135 billion in construction starts. The financial crisis is expected to slow the normal expected decline at this time.

Murray’s take: “I think what we're going to be seeing in 2009 and 2010 as a result of the stimulus bill, is that public works will in effect be the saving grace for construction … If you look at New York City what we've seen in recent years is a huge amount of waste-water treatment plant construction, water supply tunnels, certainly building related to the 2nd avenue subway or the 7th line extension.”