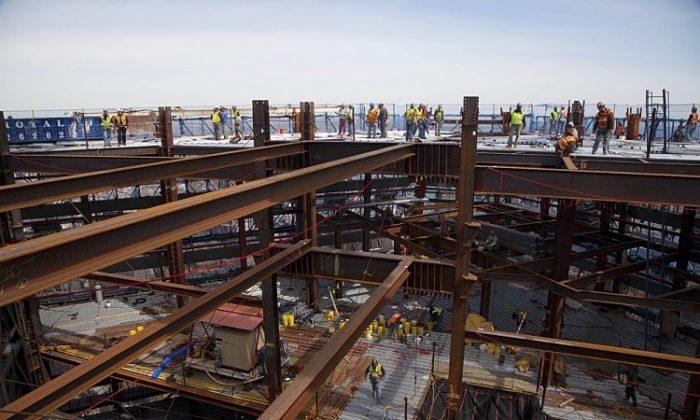 Construction Jobs Down, Wages Up

NEW YORK—Construction jobs shifted down to 102,600 in the first quarter of this year, the lowest number of industry jobs since 1999, according to the New York Building Congress.

The number of jobs has dropped 20 percent since the first quarter of 2008, a peak year when the average number of jobs was 131,800. Yet a recent projection by the building congress has construction jobs rising to 120,800 this year.

Less jobs, more money. Earnings for workers are slowly rising, with an average annual salary of $51,000 in the first three quarters of last year, up from a $48,600 average over the same time period in 2009.

Richard T. Anderson, president of the congress, said in a statement that government spending “helped buoy the industry in the aftermath of the Great Recession,” but now private companies are firing workers because of decreased government spending. He said the congress is “encouraged by the uptick in employment for buildings workers, which suggests that private sector developers and institutions are beginning to invest once again in residential, commercial and institutional properties.”