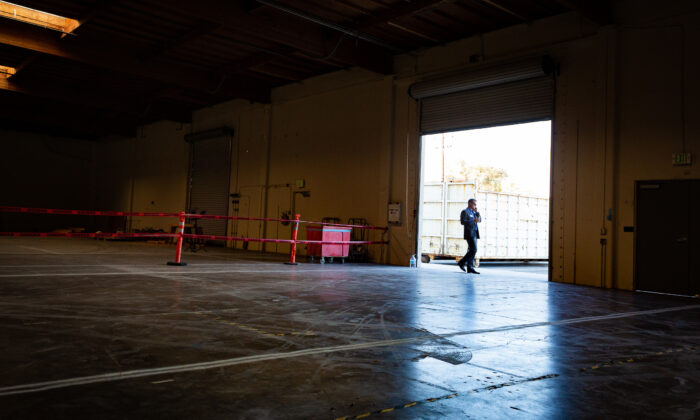 A man stands inside the entrance to an industrial building that will be converted into a homeless shelter in Santa Ana, Calif., on Oct. 30, 2020. (John Fredricks/The Epoch Times)
Southern California

The project will turn an existing industrial building into a two-story homeless shelter that will be run by the city of Santa Ana and Illumination Foundation, a nonprofit organization that works to break the cycle of homelessness. The shelter will also act as a “navigation center,” directing the needy to the appropriate available housing and medical services.

Officials spoke about the shelter—located on a 1.7 acre property in an industrial area at 1815 Carnegie Ave.—at an Oct. 29 ceremony.

Paul Leon, CEO of Illumination Foundation, opened the event by thanking everyone who helped the project get its start.

“We have a limited budget—it’s going for individuals who right now are suffering from mental illness, substance abuse, and lack of housing. We can’t wait to come back and open up this facility,” Leon said.

The new shelter will provide 200 beds for individuals, couples, and children. CalOptima, the county’s insurance provider for the less fortunate, will fund 50 of them to be used by transients who are recuperating from medical treatment.

The facility will provide medical care, dental care, behavioral health assistance, and social workers to those needing the services. Storage space, parking, an outdoor area, and a dog run will also be available. There are no residences located within half a mile of the new site.

Leon discussed the progress Santa Ana has made over the last 15 years to support the homeless population.

“If someone would have told me [15 years ago] that we were going to build a shelter, not only a shelter but a place where people could come and receive medical help, mental help, and they can have a navigation center that will direct them to housing and health care, I wouldn’t have believed it,” he said.

“Because 15 years ago, there was so limited resources. And I have to admit that the environment at the time was pretty pessimistic. It was really tough to get leaders to take a step forward and really help with homelessness.”

The Santa Ana City Council in June approved $4 million in construction costs and nearly $600,000 more in one-time startup fees for the shelter. Yearly operational costs were approved at just under $3.2 million per year, not to exceed about $38 million over 10 years.

Solorio noted that like many others during the pandemic, the city is working to get more resources from the federal and state governments to help stop homelessness from spiking.

“We’re here because we obviously have homeless in our community,” Solorio said.

“We know from the 2019 point-in-time count that we had about 1,700 homeless individuals in our community. And the city, because of that, we’ve made this a priority in our community, not just with outreach and enforcement, but with having real shelters and facilities like this one.”

According to the county’s 2019 point-in-time count, Santa Ana had 1,769 homeless residents—the highest number in Orange County. Anaheim had the next highest number, with 1,202 homeless. The two cities combined for just less than half of the county’s nearly 6,900 homeless population.

Councilman Phil Bacerra touted the achievements of past Santa Ana homeless shelters and the success they had in helping people find more permanent housing.

“Since the interim 200-bed Link shelter opened in September of 2018, Santa Ana residents, 977 of them, have been referred to that shelter. Of that number, 151 individuals have been successfully housed. That’s fantastic,” Bacerra said.

He said the city had done an excellent job reaching out to the homeless during the COVID-19 pandemic.

“I’m very proud of the way that our city reacted and took the additional measures to protect our homeless individuals here in town. We already have many homeless folks that are here in Santa Ana, but the level of care and detail that our city staff took to help them was amazing. I want to thank all of them.”

Councilmember Nelida Mendoza told the audience that she’s thankful the city will have better options to curb the homelessness problem.

“And this here, the center, is just what we needed. So thank you to all the partners and the workers that have been working extremely hard for this very special program.”

In August, the city of Santa Ana filed an amended complaint in federal court against the county, alleging that transients continue to migrate or be ferried into the city despite a 2019 settlement agreement in which other parts of the county agreed to accept shelters to house the homeless in their areas.

The new shelter is expected to be completed in the first half of 2021.