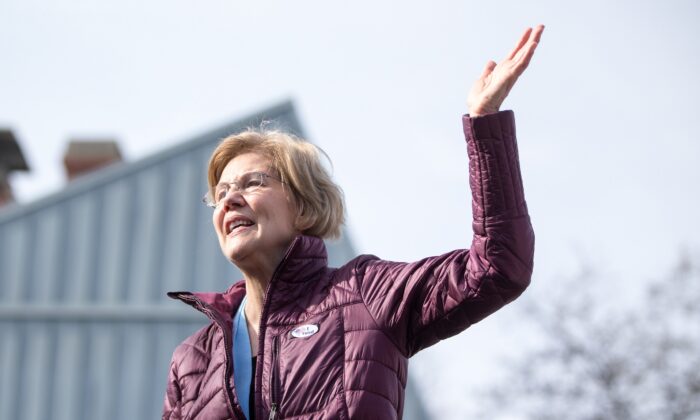 The Consumer Financial Protection Bureau (CFPB), created in the wake of the 2008 financial crash, is unconstitutional because its director, unlike the typical federal official, isn’t accountable to the elected president of the United States who appointed the person, the Supreme Court heard.

The high court is expected to render its judgment in the case in coming months, a move that seems certain to enliven the election cycle no matter what it decides.

Democrats have long defended the 9-year-old agency, brainchild of presidential candidate and U.S. Sen. Elizabeth Warren (D-Mass.) from the time when she was a bankruptcy law professor.

From the campaign trail, Warren took to Twitter as the court heard oral arguments in the case on March 3:

“Big banks & their allies will do anything to undermine the @CFPB – even ask the Supreme Court today to shut it down. We won’t let President Trump gut the consumer agency & let the big banks go back to cheating customers & gambling with our economy.”

House Democrats even filed a brief with the Supreme Court urging the justices not to take up the case, but the high court went its own way and agreed Oct. 18, 2019, to hear the matter, cited as Seila Law LLC v. CFPB.

The CFPB was designed to be free of the influence of the president. Federal law blocks the president from dismissing its director, who has to be confirmed by the U.S. Senate, before that person’s five-year term lapses, unless the termination is for “inefficiency, neglect of duty, or malfeasance in office.”

The CFPB’s unusual funding mechanism also keeps the agency independent. Although it may seek funding from Congress, the agency is excluded from the normal congressional appropriations process, and instead receives most of the money it needs to operate from the Federal Reserve System.

Republicans have long accused the agency of overreach. Then-House Financial Services Committee Chairman Jeb Hensarling, a Texas Republican who has since left Congress, called the CFPB “arguably the most powerful, least accountable agency in U.S. history,” in a 2017 Wall Street Journal op-ed.

“CFPB zealots have the power to determine the ‘fairness’ of virtually every financial transaction in America. The agency defines its own powers and can launch investigations without cause, imposing virtually any fine or remedy, devoid of due process,” he wrote.

“The regulatory web spun by the CFPB can make every provider of financial services guilty until proven innocent, inviting selective enforcement and financial shakedowns.”

He said the agency embodies James Madison’s warning in Federalist No. 47 that “the accumulation of all powers, legislative, executive and judiciary, in the same hands … may justly be pronounced the very definition of tyranny.”

The petitioner, Seila Law, a California-based law firm, had refused to honor CFPB’s request for information, called a civil investigative demand, and challenged the entity’s structure, claiming it was unconstitutional.

The firm’s attorney, Kannon Shanmugam, told the Supreme Court that the president’s inability to fire the CFPB director “at will” is a historical oddity in need of correction.

“The structure of the CFPB is unprecedented and unconstitutional,” he said.

“Never before in American history has Congress given so much executive power to a single individual who does not answer to the president. By significantly limiting the president’s ability to remove the CFPB’s director, Congress violated the core presidential prerogatives to exercise the executive power and to take care that the laws be faithfully executed.”

The Trump administration, represented in court by Solicitor General Noel Francisco, opposes the CFPB in its current iteration but did not ask the court to dissolve it.

Francisco told Justice Elena Kagan that “the problem with … [Dodd–Frank’s] for-cause removal restrictions is that they vest executive power in individuals who are not ultimately accountable to the people through their duly elected president.”

Although it has been the position of Seila Law that the CFPB is unconstitutional, in oral arguments, Shanmugam said it would be a bad idea for the court to “rewrite the Dodd–Frank Act to give the president the power to remove the director.”

“The court should leave to Congress the quintessentially legislative task of deciding how to fix the CFPB’s defective structure.”

“Why don’t we just leave it to the political branches, who actually know about these things?”

Justice Ruth Bader Ginsburg remarked that the for-cause removal provision in the law was a “very modest restraint.”

Because the Trump administration refused to defend the law that created the CFPB, the Supreme Court appointed Paul D. Clement, who served as solicitor general under then-President George W. Bush, to represent the agency’s interests.

Clement told Justice Samuel Alito that he believed the statute that created the agency is “still perfectly constitutional.”