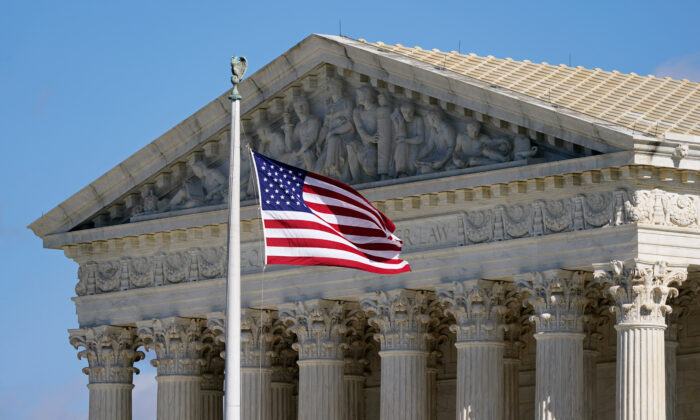 An American flag waves in front of the Supreme Court building on Capitol Hill in Washington, on Nov. 2, 2020. (Patrick Semansky/AP Photo)
Viewpoints

I fled academia in 2010 because of its increasingly bizarre environment. Since then, the situation has only gotten worse. This is reflected in the scholarly journals, in which they publish more and more silly stuff.

Recently, for example, I learned that a journal published an article (pdf) claiming that those of us who interpret the Constitution as written do so because we “hate America!” I, among other constitutional originalists, was singled out.

The author was Andrew Koppelman, a law professor at Northwestern University in Chicago. I’ve never met him. I understand that, although he can be a provocateur, he’s a fine fellow in other respects. The fact that he was born in Nyack, New York—site of my beloved high school—inclines me to think better of him than he apparently thinks of me.

Koppelman claims constitutional “originalists” are following a new and radical methodology. He believes we want to hold constitutional law hostage to shifting conclusions derived from musty old books that no one else knows about. He notes, correctly, that many of us believe the federal government has exceeded its constitutional powers and should be trimmed back.

He concludes: If we seek to inflict such changes on our country, then we must really hate America!

My friend and colleague, Independence Institute Research Director Dave Kopel (whom Koppelman also singled out for criticism), has composed a response directed at constitutional scholars, which you can read here. Kopel points out that our sources aren’t obscure at all. He further observes that it’s entirely consistent with love of country to advocate that government be improved and stay within its legal limits.

Here’s my response for readers of The Epoch Times.

Originalism Is Central to Our Understanding of Law

We originalists argue that, with some modifications, we should read and apply the Constitution by the same rules we apply to other legal documents. Specifically, we should interpret the Constitution according to its original meaning or original understanding. If judges can rewrite the Constitution with new “interpretive theories” to serve the convenience of favored or privileged people, then the Constitution is no longer the “supreme Law of the Land.”

Critics of “originalism” know that label is new, since they made up the label. (We adopted it nevertheless.) So they often assume the idea itself is new. But actually, it’s very old.

As I’ve explained elsewhere, the rule that documents should be construed according to the “intent of makers” (that’s the original phrase) has been around for at least 500 years, and probably longer. The framers wrote the Constitution to be interpreted that way. American judges and lawyers almost universally applied it that way for the following 150 years—even though (because law is not an exact science) they didn’t always agree on the results.

Today, originalism continues to be the rule of interpretation for nearly all legal documents. With minor variations according to the nature of the document, it remains the standard method for reading contracts, statutes, and state constitutions. Lawyers and judges routinely seek evidence of how the parties to a document understood it. To supplement the evidence, they employ guidelines called “rules of construction” to deduce the parties’ likely understanding.

For almost every kind of document except the U.S. Constitution, this process is entirely uncontroversial. The “problem” is that when you apply originalist methods to the Constitution, the “progressives” who dominate the legal elite often don’t like the results. So they invent new methods of interpretation to the get results they prefer.

‘Progressive’ Distortion of the Constitution

During the 20th century, “progressive” judges and academics concluded that the Constitution as written wasn’t good enough. The document was too popular to attack broadside; instead, they began to “reinterpret it to suit modern times.”

The Supreme Court rewrote several parts of the Constitution in the 1930s and 1940s, as I explained in an Epoch Times series earlier this year. (Part I of the series is here.) The court converted a federal government with important but limited powers into a centralized government with nearly unlimited power. Then, during the 1960s and 1970s, the Supreme Court rewrote other provisions to force the states to comply with liberal social priorities.

Side by side with the court’s innovations came changes in legal education. At one time, most law students were trained in the offices of senior attorneys. During the 20th century, however, law schools—especially those attached to universities—obtained a near-monopoly on legal education. Most professors teaching constitutional law were left-of-center politically. Moreover, most had little or no experience practicing law, where they would have gained perspective on interpreting legal documents.

Particularly subjected to this treatment were the Supreme Court opinions of John Marshall, our greatest chief justice. An entire generation of future lawyers and future professors never learned how Marshall relied on traditional legal sources, or what those sources were. They never knew of the limits Marshall had placed on Congress’s powers under the necessary and proper clause. Nor did they learn that Marshall himself affirmed that health policy was strictly a state, not a federal, concern.

Instead, students got the impression that Marshall was like the liberal activist justice who decides constitutional disputes by making stuff up (pdf).

There were always scholars who questioned the “progressive” rewrite of the Constitution. In the late 20th century, they began to publish intensively on the Constitution’s actual meaning. They often consulted materials their “progressive” colleagues should have been consulting all along, but had neglected. Among these are books and pamphlets by leading Founders, 18th-century law books and other writings popular with the founding generation, early state constitutions, proceedings of state legislatures and the British Parliament, proceedings of the Continental and Confederation Congresses, and the 1787–1790 debates over the Constitution itself (pdf).

When originalist findings started rolling off the press, many liberals and “progressives” became alarmed. Here was a frontal assault on the mythology they had constructed! Many were unaware of the sources originalists used. That’s why Koppelman and others think that originalism is novel and its evidence obscure.

The Disadvantages of Being Originalist

If you’re a law professor, being an originalist isn’t exactly a good career move. On most law school faculties, it will make you the odd man out. The academic journals are mostly “woke,” so unless you have good connections, it’s hard to get originalist scholarship published in any of the “prestige” journals. I know this from personal experience: Again and again, I’ve been rejected without explanation from top journals—only to find out later that those same publications deem my work important enough to print derivative pieces and rebuttals.

Along with having the proper gender and ethnicity, consistent “progressive” scholarship can be the ticket to the academic big leagues. Originalism can keep you on the sandlots till you quit.

We Do It Out of Love

Nevertheless, some of us remain originalists. Speaking for myself and the originalists I know, I can report that we do it out of love: