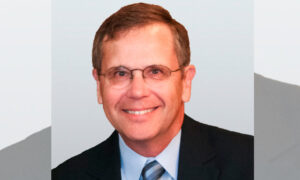 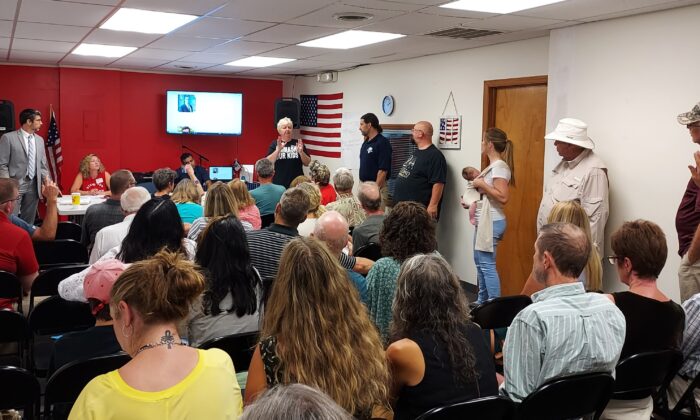 US Constitutional focus groups gather in Asheville, North Carolina in July to discuss their constitutional rights in the wake of increasing local mandates. (Photo by Matt McGregor)
Featured Topics

Amid a climate of tightening restrictions, mandates, and dwindling freedoms, U.S. Constitution focus groups have formed to sort through much of what has gone unchallenged until last year, when a growing number of people began asking if what the government is doing is legal.

As the U.S. Constitution has been reinterpreted over time, the teaching of it has diminished in the classroom, leaving the average person having little understanding of how it applies to one’s own rights.

Though the initial document was written for “We the People,” today it seems only experts are able to untangle the legal knots surrounding our liberties.

That’s where Matthew Ceradini, with Ceradini Law in Raleigh, North Carolina, comes in. He represents the North Carolina Citizens for Constitutional Rights, an organization formed in February.

“We believe in ‘We the People’ over political agendas because it’s the political agendas of the past that got us into this mess,” one of the founders, Lynn Hoosier, said on the purpose of the group. “People are fed up with the lies.”

An “inhumane standard” is being forced upon society, Hoosier said, reflecting the mechanisms of communism and socialism.

“As a grandfather and a father, I refuse to let that happen while I’m still breathing,” Hoosier said.

In a Zoom meeting on Friday, Ceradini, Hoosier, and group members met to discuss a legal plan of action against what they determined as governmental overreach, focusing on school boards where nationwide, lines have been drawn in the sand over mask requirements, with parents who challenge the mandates now targets of the Justice Department.

Ceradini explained the content of what he referred to as an “open information letter” (pdf) he sent to the North Carolina Department of Public Instruction and the chairperson of school boards in North Carolina.

The letter also questions the policies the toolkit alleges will reduce the spread of the CCP (Chinese Communist Party) virus, commonly known as the novel coronavirus, the pathogen that causes COVID-19.

One of the many problems with the toolkit is its “word salad” of undefined terms and conclusory statements, Ceradini said.

“In legal terms, a conclusory statement that presupposes the facts without actually substantiating the facts,” Ceradini said. “In this toolkit, there are a bunch of conclusory statements without saying that these things prevent COVID-19, but there is no real reference to the material associated with this document.”

Though it links to the CDC website, the toolkit never answers questions as to why these actions need to be taken, how effective they are, and what level of threat is being mitigated, Ceradini said.

“Instead, it puts what I call overly burdensome policies onto the school board to make a decision about whether or not they are going to adopt it,” Ceradini said.

If the school board doesn’t adopt the policy, as the Union County School Board had chosen not to do, it gets threatened with legal action by the NC Department of Health and Human Services (NCDHHS).

The NCDHHS has the authority to quarantine and implement control measures for communicable diseases under the North Carolina statute. However, the statute itself says the NCDHHS must issue an order, Ceradini said.

But the current guidelines issued by the NCDHHS are not orders, Ceradini said. They are recommendations.

“That’s what we are driving at here: the state is trying to get the school board to do the state’s job,” Ceradini said. “But the state should be the entity assessing the risk and implementing control measures in the least restrictive manner because it is really stepping on a lot of constitutional rights and liberties.”

Under the pretense that the pandemic is an emergency, these measures are being accepted by some. However, Ceradini said there are many studies that contradict, or don’t support, what the toolkit is claiming as safe and effective policy.

“I like to think of it as the school boards being misled into making these decisions,” Ceradini said. “Maybe it wasn’t intentional that they are violating the statute, but, nevertheless, they are, and now that they know that they are, we expect them to make appropriate decisions based on the factual information we provide in the letter.”

In his research, Ceradini said, he’s found patterns in which states, by implementing certain policies, get access to “billions of dollars” of COVID-19 relief aid from the federal government.

“Obviously, under constitutional law, if you take federal money, you must abide by the terms of the federal government that gives you the money,” Ceradini said. “In this case—and I am speculating on this—but I can almost guarantee that it’s a requirement that each school implement CDC guidelines for COVID-19.”

The federal money allows for the local school boards to be unaccountable to their constituents, he said, because then the boards no longer depend on tax dollars.

“It’s a way of federalizing our state education system, and that’s a violation of the North Carolina Constitution because, under that law, the state is supposed to be providing education to the students, not ceding its authority up to a different body.”

The implications of this suggest that the federal government can step in and buy off local politicians, he said.

The authority of the NCDHHS should be exercised for these control measures (masks, testing, and quarantines) when all other reasonable means have been exhausted, Ceradini said.

“This is the part they are violating here: they have not exhausted all other reasonable means, and they have not gone with less restrictive alternatives, have they?” Ceradini said. “No. It was just a blanket adoption of CDC policy.”

Ceradini later told The Epoch Times that the Constitution was not meant to be complicated.

Though the supreme court has adopted broad interpretations, in other instances, it has upheld the document’s original meaning, despite the change in times.

There are two camps of interpretation, he said: the originalists versus the living constitutionalists.

“I’m in the originalist camp and believe the Constitution is fundamentally a contract with and between the people of the country,” Ceradini said. “To change a contract you need an amendment, which is exactly how our Constitution operates. Thus, when the government acts outside of the Constitution, they are in breach of the public trust.”

Under contract law, when one party breaches a contract, it relieves the non-breaching party of further performance, which, he said, “is where we are right now.”

“My goal is to obtain a legal finding that the laws of the country have been breached, to enjoin the breaching parties from committing further breaches, and to obtain accountability for the damages caused by those unlawful actions,” Ceradini said.

Philosophically and practically, the government is the administrator of the people’s rights, and its role is to “handle areas of common concern for society where empowered to do so.”

When government acts outside of those enumerated powers, it does so without authority, and actions taken under these circumstances are “void from the beginning.”

The only reason these government agencies currently appear to have the authority, Ceradini said, is because “we comply.”

“When we comply with unlawful acts we give them undeserved credibility,” Ceradini said. “If we continue to do so then we will lose our rights and slip into tyranny. Thus, it is critical that we not comply, resist unlawful edicts made under color of law, and hold those committing the wrongful acts accountable.”