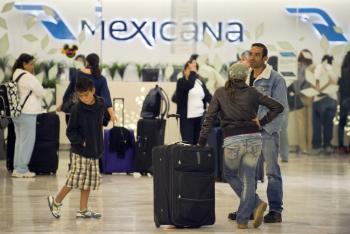 Passengers of Mexicana airlines wait for their flight to Spain at the international airport in Mexico City, on August 16, 2010. (Alfredo Estrella/AFP/Getty Images)
Business & Economy

Tenedora is a group formed by private investors in association with Mexico’s largest pilots’ union specifically created for the takeover.

Chief Executive Officer Manual Borja Chico resigned as a result of the sale, and Tenedora expects to name a successor on Aug. 25.