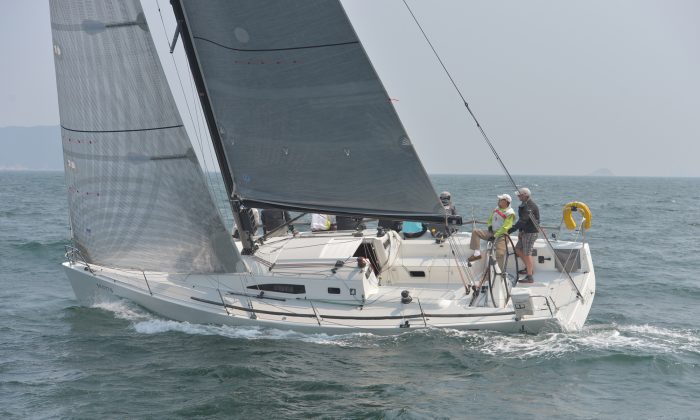 ‘Mojito’ getting a feel for the weather before their successful Day-3 in the IRC Division of the Hebe Haven Spring Saturday Series races on Saturday March 22, 2014. (Bill Cox/Epoch Times)
International

With 6-Races now completed and four more to run in the Hebe Haven Spring Saturday Series, consistency of entry and results are keeping the lead boats at the top of the standings. Races-5 and 6 for the IRC and HKPN Divisions took place on Saturday March 22 in sunny weather, a 6-12knt breeze giving good sailing conditions.

The top three boats in the IRC Division “Vixen”, “Stella” and “Outrageous” have competed in all available races and still maintain their 1, 2, 3 positions after taking the current one discard into account. But when 8-Races have been completed a further discard will be allowed and if “Mojito” takes part in all the remaining races she could move up to take the top position.

In the weekend’s races “Mojito” took two first places to move her up the standings to third place behind “Vixen” and “Stella”, pushing “Outrageous” into fourth place.

Likewise in the HKPN Division. “Bits & Pieces” although not generally winning races on corrected time is leading by posting good consistent results and competing in each race.

“Kyte”, in second place in HKPN, has also competed in all races. But “DEA II”, “Jazz” and “Jive” could still be a threat to the lead position at the end of the series. “Bits” came fourth and fifth respectively in Races-5 and -6, with “DEA II” taking both first places on corrected time. Meanwhile, “Jazz” and “Kyte” took second place in Race-5 and -6 respectively.

Sports Boats have, so far, only completed four races, but could just reach the 8-Race threshold to allow two discards by the end of the series.

This is a tight contest between “Merlin” and “FreeFire 69 It’s My Pleasure” with only 1-point separating the boats at this stage, after “FreeFire” gained a point over “Merlin” in Races-3 and -4. Although “Merlin” won Race-3, she was pushed into third place by “FreeFire” and “Phoenix” in Race-4. “FreeFire”, on the other hand, took second and first in the two races respectively.

“Phoenix” still has a chance to top the standings if she competes in the final four races as she needs two discards to wipe out the high points for not competing in Races-1 and -2. Meanwhile, “Good Vibrations” and “Blue Moon” are still a little off the pace.

Tam in “Zephre” won Race-3 and came second in Race-4 to lead the series after 4-Races with 6 points.

“Wyuna” was placed second and “Kamloong” was third in Race-3, while in Race-4 “Eaux Vives” won, “Zephre” was second and “Shiva” third.