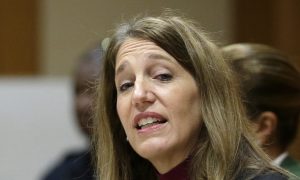 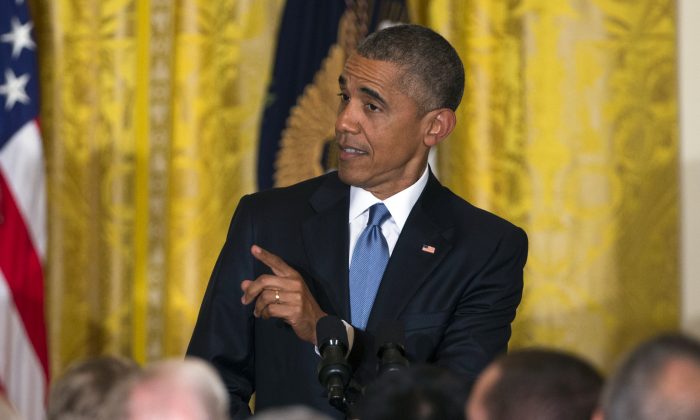 President Barack Obama responds to a heckler as he speaks during a reception to celebrate LGBT Pride Month in the East Room of the White House, on Wednesday, June 24, 2015, in Washington. (AP Photo/Evan Vucci)
Politics

Obama’s successes were in no small measure the work of a Republican leadership he has often decried as obstructionist and from a chief justice whose nomination Obama once opposed.

“This was a good day for America,” Obama declared in heralding the high court’s decision.

It was an opinion many Republicans quickly countered with continued vows to repeal and replace the law.

We had to deal with this notion of aren’t we giving up our power under the Constitution?
— Republican John Engler

As if to underscore the legacy-cementing nature of the court’s ruling, Obama cast the health care law in historic terms. Thirty years ago, he noted, the nation established Social Security to lift older Americans out of poverty, and two decades ago it adopted Medicare to offer them health care.

“This generation of Americans chose to finish the job,” he said.

The ruling came as the White House was already savoring the Senate’s passage Wednesday of fast-track trade authority that gives Congress the right to approve or reject international economic agreement, but not change or delay them. The House passed the legislation last week.

That vote came two weeks after Obama’s own Democratic Party dealt him an embarrassing defeat on trade, and it sets the stage for Obama’s real prize: conclusion of a 12-nation Pacific Rim trade pact that is crucial to his effort to expand U.S. influence in Asia.

Trade experts believe Obama’s negotiators could finish the deal by early fall and that Congress could vote on it by year’s end.

That Republicans agreed to give such authority to a president they believe has already exceeded his powers was as remarkable as Obama’s decision to push his trade agenda against all-out opposition from labor and his party’s liberal base.

In the process Obama has left erstwhile allies seething.

AFL-CIO President Richard Trumka echoed the sentiment of many Democrats when he said in a letter to lawmakers Wednesday that Obama seemed more intent on getting negotiating authority than in securing tougher trade enforcement and currency provisions and a better assistance package for dislocated workers.

“It hasn’t been easy,” said Senate Majority Leader Mitch McConnell, R-Ky. “We had plenty of bumps along the road. Frankly, a few big potholes, too. But we worked across the aisle to get through all of them.”

Obama’s success came at a sensitive moment in his presidency. Still in the balance is the push to meet a June 30 deadline to conclude an agreement aimed at containing Iran’s nuclear program.

Experts said Obama’s trade agenda would stand out as a milestone in a foreign policy largely focused on crises abroad, particularly in the Middle East and in Ukraine.

“It’s not an exaggeration to say that a successful rebalancing strategy toward Asia would likely rank among President Obama’s most significant elements of his legacy,” said Matthew Goodman, a former Asia and economic specialist at the White House during Obama’s first term.

The trade pact under negotiation links the U.S. with 11 other countries arrayed along the Pacific Rim, including Chile, Mexico, Japan, Vietnam and Australia. The agreement would lower tariffs and other trade barriers while also setting labor and environmental standards for all its participants.

Obama and trade advocates maintained the deal would open up vast new markets to American goods, particularly in Asia where China is negotiating its own regional trade agreement. But Democrats and labor fiercely argued that the deal would help big business, cost jobs and not provide adequate standards enforcement.

The challenge for Obama was to attract enough Democrats who would break with labor to overcome procedural obstacles in the Senate and make up for Republican opposition in the House. For Republican leaders, the struggle was keeping conservative opposition to Obama at a minimum.

“We had to deal with this notion of aren’t we giving up our power under the Constitution?” said Republican John Engler, a former Michigan governor who now heads the Business Roundtable, which helped lead the pro-trade lobbying effort.

Two weeks ago, House Democrats temporarily scuttled the legislation by defeating a companion measure that would aid workers displaced by trade; that’s something Democrats typically have backed.

Headlines called it a major setback for Obama. But the support for fast-track authority was already evident in a separate vote. Obama, McConnell and Boehner agreed to split up the trade and worker assistance components into separate bills and put them to a vote.

By Wednesday, House Democrats all but conceded defeat, with many saying they would now support the worker assistance package set for a vote Thursday.