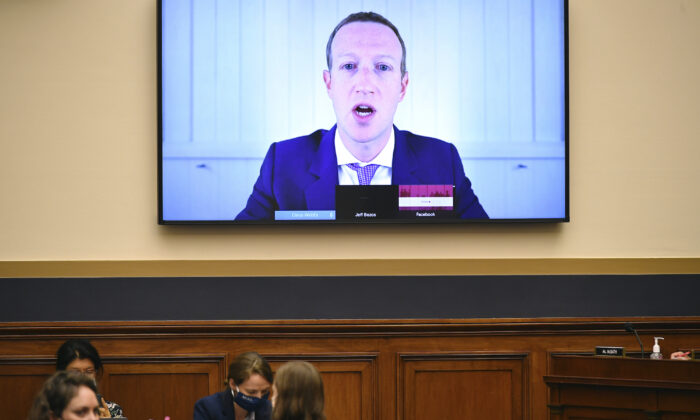 In the case of big tech, the time for ‘outmoded’ libertarian bromides on government non-intervention has passed, says the legal expert
By Gary Bai

American conservatives should use institutional authority to punish companies, including Big Tech corporations, that go “too woke” and control “every major cultural institution in America,” said a legal expert during a panel discussion on Thursday.

“There is literally one institution, broadly speaking, that liberal progressives do not monolithically, unilaterally control. It is the government,” said Josh Hammer, Newsweek’s opinion editor and counsel for the Internet Accountability Project, during a panel discussion held by the Heritage Foundation on May 5.

In countering Big Tech’s expansive control, conservatives should “use power” against “woke” companies, similar to Florida Gov. Ron DeSantis’s moves over Disney, Hammer said in response to a question about whether state action reining in Big Tech should be concerning to conservatives and libertarians alike.

“The broader semantic point at the level of political principle here is one of sovereignty,” Hammer said during the discussion. “Are we going to write the rules for our own town square, our own public square, to control our own destiny? Or are we going to outsource these decisions to these politically monolithic leftist hacks out in Silicon Valley?”

During the panel discussion, which was titled “Big Tech Censorship: How Does the First Amendment Apply to the Internet?,” Hammer elaborated on how Big Tech companies currently enjoy immunity from liability for censoring constitutionally-protected speech based on Section 230 of the 1996 Communications Decency Act.

Hammer referred to Norwood v. Harrison (1970), a legal case about racial discrimination, in which the Supreme Court held that the government “may not induce, encourage, or promote private persons to accomplish what it is constitutionally forbidden to accomplish.”

Yet Congress has provided “extralegal immunity” for Big Tech companies by enacting Section 230, “permitting them to censor constitutionally-protected speech,” he said.

“When Congress goes and provides this extralegal immunity, [the Big Tech companies] cannot censor speech that would otherwise be First Amendment-protected if it were espoused from a sidewalk. But that’s exactly what they have done,” Hammer said, adding that courts interpreted the “so-called ‘good Samaritan’ provision in subsection C” of Section 230 to give “large swaths of discretion to the Big Tech elites, to the oligarchs, that that has created a constitutional problem under the very wording of Norwood versus Harrison.”

Compounding this public-private relationship are the “implicit threats” from the public figures from the left—such as White House press secretary Jen Psaki’s comments last year on “working with Mark Zuckerberg to tamp down COVID misinformation”—which “decisively blurred” the line between public and private actors, Hammer added.

According to Hammer, this “carrot-and-stick” approach from the left has allowed Big Tech companies to garner a significant amount of control of what people see, even in something as foundational to a functioning democracy as elections.

Such was the case when Twitter censored the New York Post’s Hunter Biden laptop story, a move that Hammer says may have swayed the votes of a consequential number of people.

“I know that paper extremely well—they were locked out of their own Twitter feed. You couldn’t even direct-message the link. You literally cannot privately share the link to this bombshell story that upwards of 20 percent of people said would literally change their vote,” he said.

Another exemplary case demonstrating Big Tech’s influence in elections, Hammer said, was Google’s algorithmic manipulation in the 2016 election, as testified by Harvard University’s Robert Epstein in a congressional hearing in 2019.

In the congressional hearing Hammer referred to, Epstein, a research psychologist for nearly 40 years, testified that “Google presents a serious threat to democracy and human autonomy.”

As a result of Big Tech’s influence, the principles of libertarian absolutism would not be conducive as a remedy to restore free speech, according to Hammer.

“The day that Apple, Google, and Amazon, through their app stores and Amazon Web Services respectively, decided to nakedly and openly collude to nuke Parler was the day that the build-your-own-Google talking point died,” he said. “The libertarian absolutism argument literally died in January 2021.”

Hammer said that, contrary to “outmoded doctrinaire libertarian bromides” about eliminating regulation while in power, conservatives in control should use their power to counter the left’s influence.

An example of this countermeasure, Hammer noted, is to tie “Section 230 extralegal immunity to a First Amendment standard by statutorily codifying that in lieu of the good Samaritan provision of subsection C of the statute,” which would effectively stop Big Tech companies from banning people for constitutionally-protected speech.

Hammer suggested that another way to counter Big Tech’s monopolistic behavior is to apply common-carrier standards to platforms such as Google and Facebook.

Currently, parallel measures such as the coordinated censorship of Parler do not constitute a “per se antitrust violation” under the Sherman Act of 1890, Hammer said. Therefore, to address collusive conduct of a similar nature, he recommended that Congress amends the antitrust doctrines to treat behavior that is “so clearly and obviously collusive” as monopolistic behavior.

“If we are going to conserve what is this American republic … what is kind of the true, the good, and beautiful, the order, and the liberty the Constitution properly enshrines for generations upon generation, it’s time to actually use power to punish the companies that go too woke,” Hammer said.