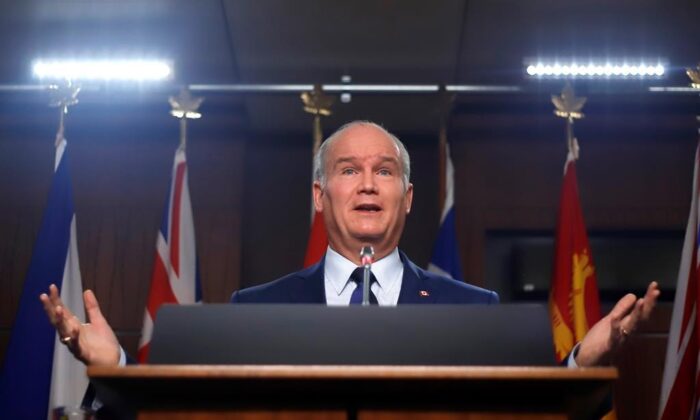 OTTAWA—Conservatives will push for a vote on a new all-party House of Commons committee to look back at Canada’s plan for the fall of Afghanistan to the Taliban and the response to the humanitarian crisis that followed.

Conservative Leader Erin O’Toole says the committee will help Canadians understand why Canada failed to act when the United States pulled troops out of Afghanistan on Aug. 30.

“This government did not act and Canadians watched as those who helped our soldiers, helped our aid workers, helped our diplomats in one of the longest, most arduous missions in our history. We watched as we left people behind,” O’Toole said in the House of Commons Tuesday.

The Conservative motion calls for the government to provide documents about the government’s plans for the eventuality of the U.S. withdrawal, instructions that were issued to execute those plans, and communications about the impact of calling a federal election.

The party said the opportunity for all-party oversight of the crisis was lost when the Liberals called an election on Aug. 15, the same day Taliban forces took control of Kabul.

The government has committed bring 40,000 refugees and vulnerable Afghans to Canada, but so far about 4,040 have arrived.

On Monday Canada signed a joint statement with about 20 other nations to express concern about reports of summary killings and disappearances of former members of the Afghan security forces.

Immigration Minister Sean Fraser says a review of Canada’s response will be in order eventually, but right now the government is in the middle of trying to get Afghans to Canada.

He says the resources are still needed for that work, and should not be spared to facilitate a review when there is so much work still to be done.

“If parliamentarians from all parties want to examine the path forward (with) ideas on how we can safely and expeditiously resettle more Afghan refugees, I would benefit from their advice,” Fraser said in an interview Tuesday.

“The rearward-looking nature of the motion at a time when our effort needs to be dedicated on solving big problems in front of us is something that may not be as productive.”

He is also concerned about preserving the identity and safety of those who Canada has working to protect and says the motion, as proposed, as the potential to endanger lives.