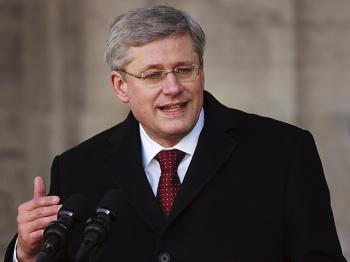 By Helena Zhu
Print
With only one more week until the May 2 election, the outcome is still highly unpredictable. If either the rising New Democrats make their gains or the Liberals hold their current seats, it could deny the Conservatives of a chance for a majority in the House.

In the second-last weekend before election, Prime Minister Stephen Harper announced several new policies, including the creation of an Office of Religious Freedom and a new $500 Children’s Art Tax Credit, and reiterated that the Conservatives have a “zero tolerance” toward the promotion of terrorism, countering Liberals’ accusation earlier this week.

If created, the Office of Religious Freedom would ensure that defending persecuted religious minorities become a priority of the nation’s foreign policy.

“Canada is fortunate to have men and women of such courage as you,” Harper said Saturday to a crowd including “courageous” Canadians who have come to Canada fleeing religious persecution. Many of those who escaped to Canada in the audience have experienced violence and torture in their countries just for professing their faith openly.

“The spirit that you have shown in standing up for freedom in your own lives should inspire all Canadians,” Harper said.

Harper added that although Canada is a society where freedom of conscience does not face threat of persecution or violence, Canadians cannot forget that others are persecuted in other parts of the world.

Harper said the new office, which would take up $5 million annually, will remind “religious minorities everywhere that they have a friend in Canada.”

Some of the most severe religious persecutions in the world include those in China, Burma (Myanmar), Iran, and North Korea.