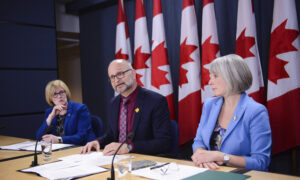 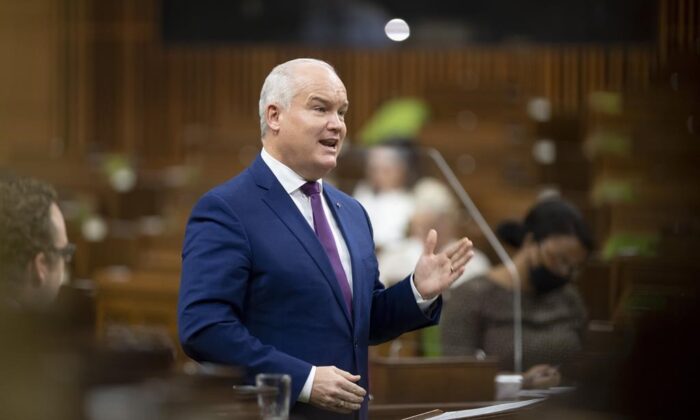 Conservative leader Erin O'Toole rises during Question Period in the House of Commons on December 3, 2020 in Ottawa. (The Canadian Press/Adrian Wyld)
Canada

OTTAWA—Opposition Conservatives appeared Tuesday to be pushing the Liberal government to ask a Quebec court for yet another extension on a ruling that struck down existing legislation on medical assistance in dying.

Despite a suggestion by Conservative Leader Erin O’Toole that the Liberals could signal they will make that request, Justice Minister David Lametti’s office said their goal remains passing the new bill by the court−mandated deadline of Dec. 18.

Efforts by the federal government to comply with that deadline are running well behind schedule as the Conservatives have been seizing every minute of debate available to press several concerns they and others have with the bill.

The new legislation, known as Bill C−7, follows a decision last fall by the Quebec Superior Court, which struck down the provision in the law that allowed assisted dying only for Canadians whose natural death was reasonably foreseeable.

That was deemed too narrow, and a violation of the charter rights of those who couldn’t access an assisted death.

The original ruling gave the government six months to introduce new laws, but the court twice granted the government an extension, with the latest one running out in 10 days.

The Commons is currently scheduled to break for the winter Friday.

The bill must still pass third reading there, then go to the Senate. If it emerges with amendments from that chamber, it would have to return to the Commons, all steps that may not be possible to take under the current timeline.

O’Toole said Tuesday that’s the government’s fault, and they had options they didn’t pursue to get Parliament out from under the pressure of a deadline.

Several other MPs advanced that line of argument during their own speeches Tuesday.

That, in turn, prompted accusations from the Liberals that the Opposition is deliberately trying to ignore a court ruling, as well as calling into question the character and competency of a Superior Court judge.

O’Toole said his party is standing up for the most vulnerable.

“I think all Canadians want to make sure the vulnerable are provided for, that is all we’re asking,” he said,

“And so if we have to stay here for 24 hours a day, seven days a week to stand up for those Canadians, we will do that.”

The bill has been caught up in the twists and turns the COVID−19 pandemic has created for much of the Liberals’ legislative agenda.

A version of the assisted−dying bill was introduced in February, though never made it committee before Parliament closed its doors in March as part of the countrywide shutdown to slow the spread of the novel coronavirus.

When Parliament resumed, it was dealing exclusively with pandemic−related matters, and then when the government prorogued Parliament in August, it had to be reintroduced.

That happened in October, and the Liberals argue there has been extensive debate since.

During question period on Monday, Lametti said what the Tories are doing is stalling.

“All that the Conservative party is doing right now is delaying and causing more people to suffer,” he said.

“We therefore are asking all parliamentarians on all sides of the House to pass this bill as expeditiously as possible.”