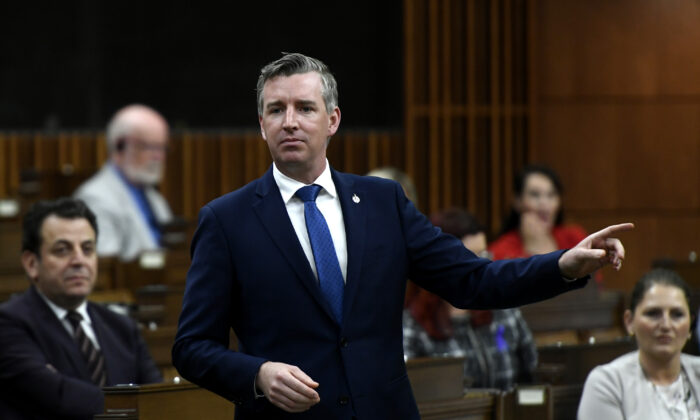 Conservative MP Michael Barrett rises during Question Period in the House of Commons on Parliament Hill in Ottawa on June 15, 2021. (The Canadian Press/Justin Tang)
Canada

The Conservative Party has introduced a motion to end all federal vaccine mandates, including the ability for Canadians to travel without proof of vaccination.

Tory MP Michael Barrett, who brought forward the motion in the House of Commons on March 24, said the federal COVID-19 vaccine mandates have continued to keep Canada locked down, prevented Canadians from visiting their families, and worsened mental health for residents, noting many provinces across the county have already lifted these public health restrictions.

“Canadians did everything that was asked of them, even boasting some of the highest vaccination rates in the world—but we can’t live under these restrictions indefinitely,” he said.

“When you look to countries around the world, our allies, and you look to provinces across this federation they’re ending the mandates. And every province in this country, following the advice of their chief medical officer of health, has either lifted the mandates or has publicly released their plan to lift the mandates.”

Barrett said the Liberal government, and the NDP which has recently formed an alliance with the Liberals, are not listening to recommendations of medical experts who are now supporting the lifting of mandates.

“In the Ottawa that is governed by this NDP-Liberal coalition, they’re not following medical science. They’re looking to the political science that they’ve used to divide Canadians, to divide communities at a time when we needed real leadership,” he said.

He said Canadians “are rightly confused” when they are allowed to go to a packed sports venue or theatre without proof of vaccination or a mask, while these measures are still required of them when travelling by land or air.

On March 23, federal Health Minister Jean-Yves Duclos told the House of Commons that vaccination and masks “will continue to be important over the coming weeks,” because the epidemiological situation in Canada is “improving but unstable.”

He noted that while over 85 percent of the Canadian population has received at least one dose of COVID-19 vaccine, including 81 percent being fully vaccinated and roughly 17.7 million have received the third dose, many are still not vaccinated.

“Three million eligible Canadians have still not received a first or second dose of the primary vaccine series and only about 60 percent of adults have received a booster dose,” he said, adding “these numbers are not enough.”