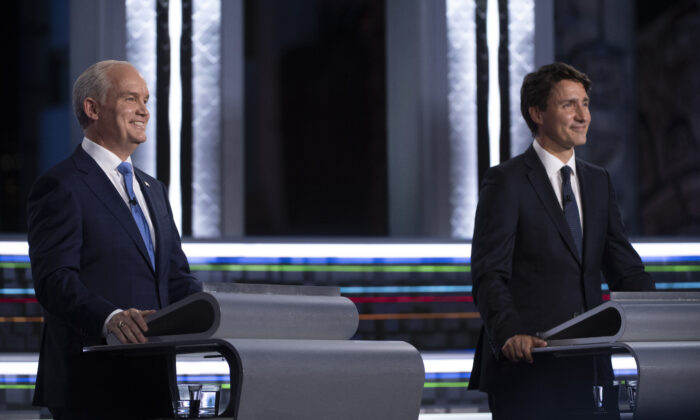 The Conservative Party released a costing for their 2021 election platform on Sept. 8, committing to reduce the federal budget deficit without cutting government programs.

The Conservative’s costing plan aims to reduce deficit by 85 percent, from $168 billion this year to under $25 billion in 2025-26. According to the plan, Conservative platform promises would first add $30 billion to this fiscal year’s projected budget deficit of $138.2 billion. The deficit would then be reduced year-by-year thereafter.

“Even without the additional growth that will result from the plan, no cuts are needed because Conservatives will run a disciplined government that limits the growth of future spending,” according to the costing document.

The costing produced by the government’s fiscal watchdog, the Parliamentary Budget Officer (PBO), was released just hours before the French-language leaders’ debate.

In a press conference held prior to the leaders’ debate, O’Toole told reporters that in this election, the time given for delivering the economic policies was limited due to Trudeau’s snap election call.

“That was a process that Mr. Trudeau set up. We could not access the PBO until the campaign began,” O’Toole said.

The Conservatives’ economic recovery plan listed several means to boost Canada’s economic performance, including a $5 billion investment in the Canadian Advanced Research Agency, which would increase GDP by 0.6 percent to 1.6 percent over the next five years, based on PBO assumptions.

The $7.6 billion Canada Job Surge Plan will also produce up to an estimated 180,000 jobs. And the $5.6 billion annual investment in Canada Workers Benefit will also increase employment by 0.5 percent, or roughly 95,000 jobs.

The Conservatives also aim to increase business investment by 2 percent over four years through the $13.8 billion in the Canada Investment Accelerator.

The document shows plans to eliminate some programs from the Liberals, including the $2 billion budgeted in the 2021 federal budget for “natural climate solutions” over five years. This would be reallocated to the Conservatives’ $1.5 billion project.

The Conservatives also intend to cancel the Trudeau’s universal child-care plan, freeing up $26.7 billion, which would partially be used to fund the Conservatives’ refundable tax credit covering up to 75 percent of the cost of child care for lower income families.