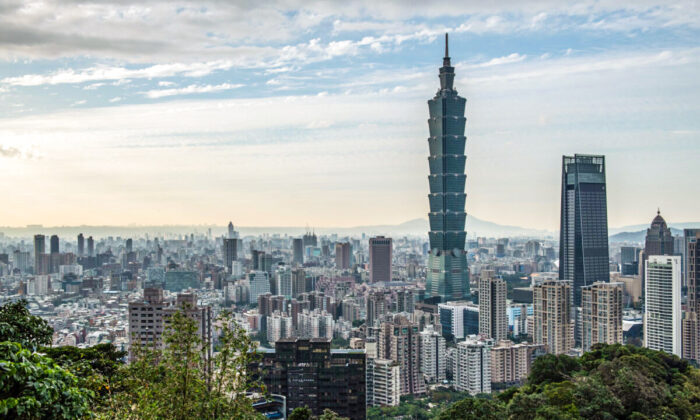 The Taipei 101 tower, once the world's tallest building, and the Taipei skyline, are pictured from the top of Elephant Mountain in Taipei, Taiwan, on Jan. 7, 2020. (Carl Court/Getty Images)
National Security

Conservatives Clash Over Whether to Defend Taiwan

ORLANDO, Florida—Influential conservative thinkers were in stiff disagreement over whether the United States should defend Taiwan in the event of an attack by China, at the National Conservatism Conference in Orlando on Oct. 31.

Michael Anton, a former Trump national security communications official and Hillsdale College lecturer, argued that China would seek to conquer Taiwan regardless of whether or not the country was ruled by the Chinese Communist Party (CCP). He likened the fate of Taiwan during the late 1940s, when the Republic of China (ROC) was forced to retreat to the island during the Chinese Civil War, to China’s loss of Hong Kong in 1842 to the British Empire.

Taiwan, controlled by the ROC since Japan’s 1945 surrender during WWII, had been under Japanese control after 1895, when China’s Qing empire lost the Sino-Japanese War. It had previously been controlled by the Qing since 1683.

The British signed a lease for the New Territories of Hong Kong for 99 years from 1898. When the United Kingdom tried to negotiate an extension of their lease during the late 1970s, Beijing refused, and Hong Kong returned to China in 1997.

“This is something that was a thorn in the side of China as a civilization—not as one regime, not as the communist regime—of China for 150 years,” argued Anton.

Anton went on to claim that if China succeeded in sinking a single American aircraft carrier, it would cost $12 to $14 billion and cost more lives than 9/11.

“Remember what a psychological shock and wound to the nation that was,” he added.

Michael Pillsbury, a defense expert who served in the George H.W. Bush administration, disagreed with Anton.

Pillsbury argued that China is weakened by “controversy and debate and power struggles that go on at the very top,” saying that top CCP leaders have a history of killing each other.

Pillsbury went on to say that Anton’s very public argument, made at a major conference, would be interpreted by “the paranoid group” in the CCP’s leadership as “an American deception,” further justifying their own investments in nuclear weapons.

“There’s a long conservatism history of standing up for a free people,” Pillsbury said, pointing to the example of Barry Goldwater, who in 1979 filed a lawsuit against Jimmy Carter for Carter’s nullification of a defense treaty with Taiwan in favor of China.

“I’m going to have to go home to Washington to say, ‘Yes, I went to the conservatism conference. A bunch of the people there on the panel said, ‘Surrender Taiwan, we don’t want to get into a war with China.’ That’s appeasement. Michael Anton should clarify his remarks, in my humble opinion,” Pillsbury added.

In response, Anton repeated his hypothetical about the loss of an aircraft carrier:

“If they can’t sink an aircraft carrier, and if the only way to stop an invasion of Taiwan is to deploy the foreign deployed aircraft carrier in [Yokosuka] and maybe send one or two others out there, which, as far as I know, is the only way for the United States to effectively defend the island if the Chinese decided to do it—and they sink one of these $12-to-$14 billion behemoths with 6,500 men on board. What’s the U.S. response going to be at that point?”

“Well, we could turn to you and say, ‘I surrender,’” Pillsbury responded.

Anton went on to argue that China could be willing to deploy nuclear weapons against an American city in the event of a conflict with Taiwan. The loss of a single American city, Anton said, would be “the greatest shock, psychological shock the United States has ever had in its history.”

Pillsbury responded by saying the Japanese had made a similar calculation about the American psyche when they attacked Pearl Harbor.

“They thought the attack on Pearl Harbor would produce the kind of surrender syndrome you’re talking about,” he said.

In the event of losing a city to a nuclear weapon, Pillsbury argued, “the demand for revenge would be enormous, and we would administer it to the Chinese. They don’t know that.”

Two other panelists, David Goldman of Asia Times Holdings and Curt Mills of the American Conservative, weighed in with their own perspectives.

“The ideal situation is to maintain the status quo as long as possible,” Goldman said, arguing that the United States should maintain “strategic ambiguity.”

“I ultimately, don’t care about China. I care about the United States of America,” he added.

Mills argued that a Chinese invasion of Taiwan would be widely recorded on video, making it harder to ignore Chinese ascendancy.

Mills added that many people in the West “sheepishly agree” that China, as a non-European power, is due for a rise.