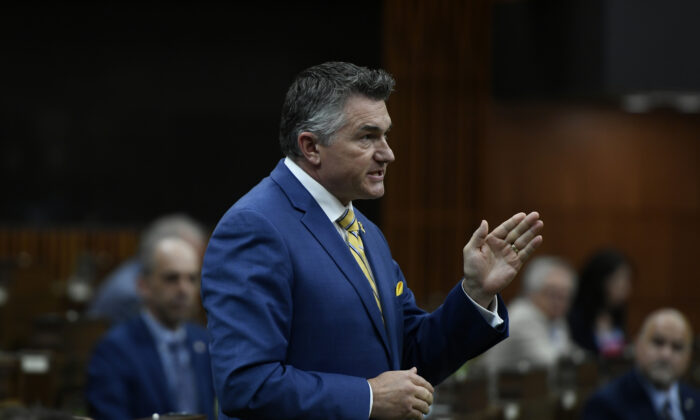 Conservative MP James Bezan rises during Question Period in the House of Commons on Parliament Hill in Ottawa on June 10, 2021. (The Canadian Press/Justin Tang)
Canada

OTTAWA—The Conservative opposition is calling on Liberal government to give urgent funding to Kabul safe houses that are providing refuge to 1,700 Afghan interpreters and their families.

On Friday, those safe houses are set to close because the money keeping them open will run out.

That could leave their occupants at the mercy of Afghanistan’s new Taliban rulers, who stormed back to power this summer.

Conservative MP James Bezan says the Trudeau government has been missing in action and must step in and fill the spending void.

The government has not directly funded the safe houses, which were seen as a temporary measure to move vulnerable Afghans out of the country following the return to power of the Taliban in mid-August.

Veterans groups previously raised about $2 million in private donations and now say they will need an additional $5 million to keep the safe house open after Friday.

“Not only did Justin Trudeau fail to get Canadians, interpreters, support staff, and their families out of Afghanistan as the country fell to the Taliban, he is now refusing to fund their safe houses,” Bezan said in a written statement.

“These individuals supported our military heroes in Afghanistan and the least we can do is help make sure they are safe.”

It has said it is working with the Veterans Transition Network and Journalists for Human Rights to protect vulnerable people in Afghanistan including human rights defenders and former Canadian Armed Forces interpreters.