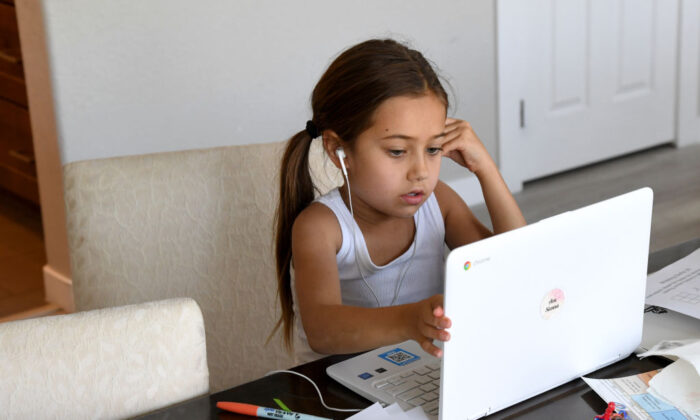 As children learned from home during the pandemic, parents saw what they were being taught. In some cases that's triggered pushback from parents opposed to how controversial topics were being handled. (Ethan Miller/Getty Images)
Education & Family News

Conservatives and Union Members Battle For Control of Town’s Schools

Conservatives and a teachers union have squared off over a small Colorado town’s schools.

After years with no contested school board election, a conservative slate last November took four of five seats on the Woodland Park School Board in Teller County outside Colorado Springs.

They started delivering on campaign promises quickly but just as quickly faced a recall effort led by the local teachers union with help from its state and national allies.

Having allegedly harassed one new board member into resigning this spring, they started a recall drive against the three others and by this week’s petition deadline had narrowly met the signature threshold for two of them.

Whether they’ve got enough valid signatures to trigger the recall election remains to be seen.

The recall effort is one of many such fights across the country.

Parents are struggling to regain control of schools many think have gone over the top in what they teach and how they teach it—subjects like Critical Race Theory, the 1619 Project, Black Lives Matter, and gender fluidity, in many cases information directed at very young children.

Jameson Dion, a Woodland Park resident who defends the school board members, said he and his wife, who have no children, got involved after moving to Woodland Park during the Covid pandemic.

One reason they’d moved was disenchantment with health restrictions passed by local health officials where they lived in the Denver suburbs. “We realized a bunch of people were dictating our destiny that we never voted for and didn’t know.”

They moved to Woodland Park—where Dion, 37, had been born—partly because the county sheriff there refused to enforce what he regarded as unconstitutional mandates during the pandemic.

“We vowed we would be involved in local politics and control our lives a little more,” Dion said. He started attending school board meetings and got involved in the campaigns of the four conservative candidates, who all won by comfortable margins.

He said Teller County is one of the more conservative in the state. Donald Trump carried the county with 66.4 percent of its vote in 2020.

Dion said many veterans live there, retired from the Air Force Academy and other military bases in and around Colorado Springs.

That the school system was in trouble was apparent, Dion said. It had lost 36 percent of its students in the previous decade, far more than the 8 percent decline in school-age children during that time.

One group of disenchanted parents wanted to break away by forming a charter school.

Dion said that the old school board turned them down based largely on plan shortcomings that likely would have been addressed further into the process, such as busing, and school lunch programs.

The parents then formed a contract school, an independent one not requiring board approval, getting some state funds but needing to rely on donations and outside funding to meet its budget.

That school, Merit Academy, launched last year with almost 200 students, around 10 percent of the public school system’s enrolment, and with another 100 on its waiting list, he said.

One issue triggering the reform election last year was something occurring nationally.

During the lockdown children stayed home to attend class online and parents learned what they were being taught and how it was being done.

After taking office, they quickly moved to deliver on those promises.

Teachers got an 8.5 percent raise.

The school board eliminated mask mandates the previous board had enforced for over a year.

It created a “sensitive subject” policy, ensuring parents would be informed beforehand if their children were going to be exposed to something age-inappropriate.

And the board approved making the Merit Academy a charter school, removing the financial burden for its operation from parents—two of whom had mortgaged vacation homes to help fund it.

And since declining enrolment had left school buildings using only half their capacity, they allowed the charter school to rent out part of the middle school.

But efforts to resist the new school board began almost immediately, with protests and demonstrations at school board meetings.

One new member was harassed into resigning, Dion alleged.

Dion said that the opponents started peppering the school board with public records requests, so he figured he’d do the same.

The NEA’s website contains an article on “How To Oust A Right-Wing School Board” detailing one such campaign a few years ago in Colorado’s Jefferson County near Denver.

Dion said that most of those active in the Woodland Park recall attempt are in the union or have ties to it.

He also discovered a high school English class had read only one book the previous year, and it was “Between the World and Me” by Ta-Nehisi Coates, the son of a Black Panther and prominent writer backing critical race theory positions.

“This is not a neutral mainstream book,” Dion said.

Another thing he came across was an email from a union rep to a concerned school employee mentioning plans for continued “disruption” of school board meetings, after one session in which a group of teachers— union members—had all worn red shirts and then staged a walkout.

He also found a kindergarten teacher had penned an op-ed in the Colorado Sun headlined, “The election, the Capitol attack and Black Lives Matter come to a kindergarten classroom in rural Colorado.”

“I would argue BLM and Jan. 6 are above a kindergarten child’s understanding and not age-appropriate,” Dion said.

There has been legal sniping by both sides.

The recall leaders sued the school board for allegedly violating open meetings law.

A judge denied their request for an injunction on that issue, but did instruct the school board to be more precise on its agenda items.

They’d approved beginning negotiations with Merit Academy over charter school status on Jan. 26 at a special board meeting under an agenda item labeled only “Board housekeeping,” according to a report on KRDO.com.

Meanwhile, the recall leaders may find themselves under the gun for missing deadlines for legally required financial reporting of their effort, Dion said.

He alleged one was recently arrested in connection with having filed a false police report against the wife of a school board member.

A Woodland Park Police Department representative acknowledged that a case number had been established in connection with the recall leader, but would not disclose further details or provide a copy of the arrest report, saying he was not authorized to do so.

The police chief did not respond to repeated calls from The Epoch Times about the case.

“I’m stunned to see this happening in a public school, even in a conservative county,” Dion said.

“I’m offended the parents aren’t being informed. The attitude is, ‘It’s our job as educators to raise your child. It’s none of your business what we’re teaching.’

“I’ve been taken aback that their job is not to teach STEM [science, technology, engineering, and math] but to raise your child, to teach them what to think.”