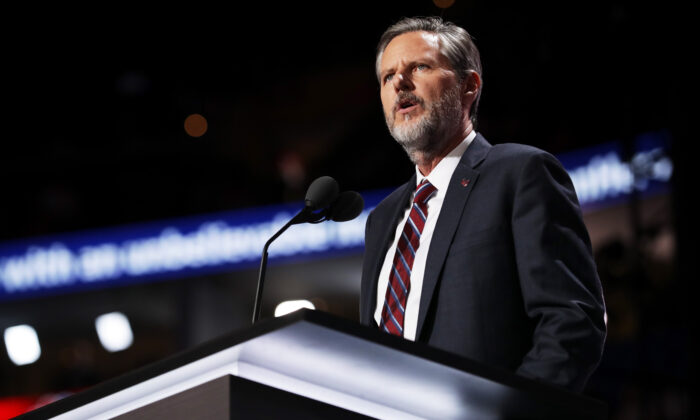 The proposal by grassroots conservative activists, dubbed “Vexit,” calls for redrawing the border of Virginia, whose legislature recently flipped to Democrats, allowing some of the Old Dominion’s westernmost and most conservative localities to join West Virginia.

The plan, which has been openly mocked by Democratic lawmakers in Virginia, surfaced as conservatives became dismayed by a raft of left-wing policy proposals. In particular, they are alarmed that stronger gun control rules, including a ban on so-called assault weapons, have gained traction in Virginia’s General Assembly.

Opposition to the proposals is strong at the local level. More than 100 Virginia communities have recently adopted measures declaring support for the Second Amendment or promising noncompliance with gun-control measures they say violate the U.S. Constitution.

West Virginia, formed in 1863, is the only state to have been carved from a Confederate state during the Civil War. President Abraham Lincoln ignored dissent in his own cabinet while Congress approved legislation creating the new state. After the war, Virginia challenged its territorial loss in the Supreme Court but lost, according to a report by WSET. The legislatures of both states—and maybe the U.S. Congress as well—would have to consent to newly proposed boundary changes for them to take effect.

On Jan. 13, the West Virginia Senate adopted a resolution reminding residents of Frederick County, Virginia, that the county has a standing invitation from 1862 to join West Virginia.

Gun-rights activists in Virginia are taking the invitation seriously, saying Americans’ civil rights are in jeopardy in Virginia. Pending bills there would shutter shooting ranges. One proposal from Democrat Dan Helmer of Virginia’s House of Delegates would prohibit indoor shooting ranges at offices housing more than 50 employees, which apparently would include a popular shooting range at the Fairfax headquarters of the National Rifle Association.

In response to Virginia’s changing gun policies, West Virginia state Sen. Randy Smith, a Republican, sent a letter to the NRA on Jan. 20 as Second Amendment supporters held a massive rally with tens of thousands of people at the Virginia state Capitol, inviting the organization to relocate its headquarters to West Virginia from Virginia.

Meanwhile, on Jan. 27, Falwell and West Virginia Gov. Jim Justice, a Democrat who became a Republican in 2017, held a press conference at a community college in the Mountain State to express support for the “Vexit” plan.

“What’s happening in Virginia right now is a tragedy in the making,” Falwell said, according to a copy of his remarks obtained by The Epoch Times.

“Democrat leaders in Richmond, through their elitism and radicalism, have left a nearly unrecognizable state in their wake … and they are using their power to strip away the God-given rights held by every person in the state, despite their due protections under the U.S. Constitution.”

“The Democrats are anti-life, anti-Second Amendment, anti-liberty, and even anti-business with their oppressive environmental regulations,” he said.

“The palpable yearning in Virginia for a pathway to greater freedom with our family in West Virginia grows greater by the day. Petitions are already circulating and one group has dubbed the movement VEXIT!”

He added that his state stands with President Donald Trump, who has campaigned on protecting Second Amendment rights.

A Republican strategist who didn’t wish to be named said the proposal would help Virginians who leave for West Virginia, but would have the effect of weakening the Republican Party in Virginia by making the state even more Democratic.

Activist Kat Vanatt said the idea “may be constitutional but I think it’s probably very impractical.” Vanatt’s nonprofit group, United in Strength for America, with the American Policy Center held a pro-Second Amendment conference near Richmond the weekend before the Jan. 20 rally.

“It’s a tempting proposal. It would be very nice to have a conservative-values state,” she said.

“The conservative reaction to the changing demographics of Virginia is literally to break up the Commonwealth, instead of addressing the real challenges and demands of our core constituencies,” Simpson said.

“Falwell’s and Governor Justice’s support makes no sense as this idea is literally the opposite of governing the citizens who elected these representatives. As Virginians, Jerry Falwell Jr. and Liberty University could begin this process themselves of ‘seceding’ to West Virginia or any other state that will accept them.”