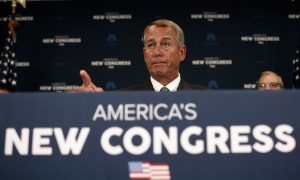 When it comes to illegal immigration, Dennis Michael Lynch has seen it all. Coming down to the southern border for four years, partly to shoot his documentaries, he has seen the oddest and most disturbing images.

From families plagued by diseases turning themselves in to authorities, to military-grade fencing cut through by drug cartels in one of the most secured areas of the border, Lynch has seen it all.

Lynch, 45, is a Long Island-born tech entrepreneur-turned filmmaker. Just describing his views as conservative wouldn’t do him justice. With the amount of legwork he’s done, his ideas are more rooted in reality and less aligned with wonted rhetoric. That makes him a worthy commentator, yet poses hurdles for his recent ambition to become the President of the United States.

About four years ago, Lynch started to work on documentaries about illegal immigration. “I’ve been to Texas, California, New Mexico, all of them,” he said.

For some time he volunteered with the Border Patrol in south Texas and attests that there’s no one single age or ethnic background coming to the borderline.

They stopped groups of 20–40 people that included old, young, men, women, criminals, and drug dealers. He even saw one man from the Middle East.

He saw medical reports showing kids coming in ill with everything from chicken pox to tuberculosis.

But the most shocking things happen when and where the Border Patrol is not around.

In Arizona, the border fence is lifted up to allow free flow of flood waters that come every summer. But Lynch was there last fall and saw the fence was still lifted, a month after the flood season was over.

The openings, unguarded, drew attention from the other side. “I saw footprints by the hundreds,” Lynch said. “It looked like a stampede of people came through.”

Lynch met with farmer John Ladd, who told the media that drug cartels are cutting through the border fence right at his ranch again and again. Lynch went to the border and indeed confirmed the fence has been repaired multiple times at the same spot.

If Obama’s Immigration Programs Get Axed, What About the 700,000 Expecting Protection?

The shocking part to Lynch was that right next to the ranch is the Brian Terry Border Patrol Station, a modern facility not even three years in operation.

Despite 450 agents at the station and surveillance equipment worth tens of millions of dollars placed at Ladd’s ranch, the farmer could remember almost four dozen incidents where somebody cut through the fence. Only one time the Border Patrol caught the trespassers and even then only a broken truck full of drugs was found-the smugglers got away, Ladd told TheBlaze.com.

“It’s breathtaking,” Lynch said. “You’ve got ground sensors, you’ve got drones in the air, you’ve got high-def cameras, you’ve got radar, everything you could possibly imagine.”

There are areas, he said, “where the border is technically secure.”

That’s what convinced Lynch that the apparent consensus among politicians on the right, of we must secure our borders first and then deal with the illegal immigrants inside, is false.

“They give the sound bites that the American people want to hear,” he said. “There’s no will to stop these people from coming in.”

Why is there no will? Lynch could only speculate.

Lynch accused Democrats of a plot to turn illegal immigrants into Democratic voters and Republicans of succumbing to interests of businesses hungry for cheap labor.

Residents along the border have been complaining about corruption within the Border Patrol.

In any case, Lynch said, “there’s so much upside” to illegal immigration for so many people “that there’s no will [to change].”

And that’s where Lynch’s presidential bid comes in.

Crack Down on Employers

Lynch states that he would fine the companies that employ illegal workers. In principle, President Obama would agree.

Under the current administration fines against employers jumped more than 20-fold. However, such fines are significantly low, starting at just above $3000 per employee, making it cheaper to hire an illegal worker and budget for the fine.

Electronic systems that confirm employees’ legal status, such as E-Verify, mitigate cases of illegal workers posing as legal residents. But that doesn’t solve much while the fines remain cheap.

Lynch says he would start with a fine, however, he suggested prosecuting employers with repeated offenses.

“You’ve got to cut off the job magnet,” Lynch said.

From conversations with people coming across the border, Lynch gained the impression it is more the jobs than American values what draws people in. Of the many he interviewed for his documentaries, only a few said they “just dreamed of becoming an American citizen,” Lynch said.

That’s why he believes preventing employment of illegal immigrants is the ultimate key.

“The people who really don’t want to be here, who would rather be at home but have come here because there’s a lot of money to be made, they will take that money and they’ll take their experience in America and they will return home. And when they return home and they return the message that says there’s no more job opportunities as an illegal immigrant in the U.S., the flow of people will start to cut itself by, I guarantee you, 90 percent.”

Put Patrol Back on Patrol

If and when the flow of border crossings diminishes, the problem of securing the border can be solved. If the Border Patrol wouldn’t have to chase families, it could return to chasing criminals instead.

And there would be an easy way to check if the plan works.

“If the price of marihuana starts skyrocketing then you know that we’re stopping people from coming across the border,” Lynch said.

Because the government pays about $8,000 to deport an illegal immigrant, there is a broad agreement among experts and politicians that deporting all illegal immigrants is financially impossible.

But Lynch dismisses such argument. “Just fingerprint them, put them on a plane, and send them home,” he said.

However, actually deporting an illegal immigrant is far more complicated.

The Immigration and Customs Enforcement or the Customs and Border Protection must initially find the individual and officially determine whether he or she is in the country illegally.

Then an immigration judge hears the case. The defendant can hire a lawyer and call witnesses. If the judge determines the person indeed should be deported, the defendant can still appeal to the Board of Immigration Appeals.

The defendant can also prolong the proceedings by applying for asylum, claiming new evidence, or saying deportation would bring extreme hardship to a close relative who is a U.S. resident.

If after all these measures, the court still determines the defendant is in the United States illegally, he can be put on a plane and sent to his home country.

So, even if Lynch was the president, changing the legal process may be a tough nut to crack.

But, Lynch openly acknowledges that it is a long and hard road toward a presidential bid. “I’m coming out of nowhere,” he said. “It’s very difficult.”

Update: The article was updated to better reflect Mr. Lynch position on deportations and the Border Patrol.