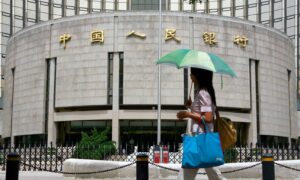 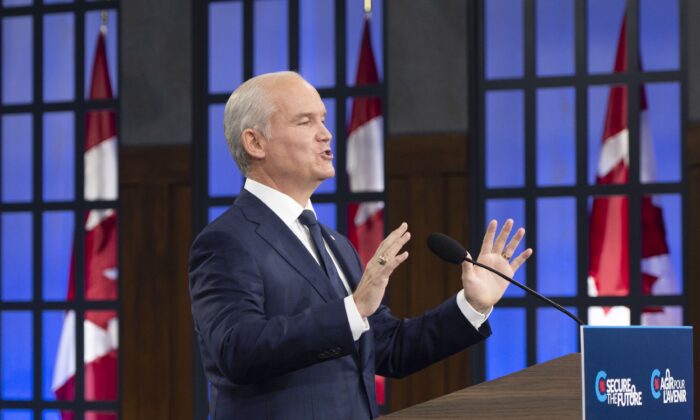 Conservative Leader Erin O’Toole speaks to the media as he launches his election campaign in Ottawa on Aug. 15, 2021. (The Canadian Press/Ryan Remiorz)
Viewpoints

In this election, it is imperative that leaders show they recognize the reality of China as a rising, antagonistic superpower with which we can no longer endeavour to be partners. Also crucial is that they articulate a well-designed plan to handle Beijing as it continues to make the international order more unpredictable.

So far, the Conservative Party is the only party that has made this issue part of its detailed platform. In broad terms, the Conservatives seek to completely review and revamp Canada’s approach to foreign affairs to make it more adaptable, putting the focus on protecting our society and institutions from foreign infiltration, self-reliance, and reorienting our geopolitical focus and alliances.

Lamenting that Canadians have “taken our peace, security, and prosperity for granted,” the Tories say their policy will help ensure “Canada is ready and able to defend our national interests and protect our way of life.”

In recent years it has become clearer how our servile posture toward China is often informed by influential elites with connections to Beijing that incentivize them to advocate policies of which the only long-term beneficiaries are coincidentally themselves and the Chinese Communist Party. This has allowed the CCP to deepen its influence in Canada and infiltrate Canadian institutions through partnerships with universities and other business entities.

To address this, the Conservatives are calling for the passing of a Foreign Agents Registry Act that would require “individuals and companies acting as agents of foreign principals” who engage in activities such as lobbying and advertising to register and disclose payments, relationships, and their activities. The platform also boldly puts forth the idea of imposing a ban on senior public office holders (prime ministers, ambassadors, deputy ministers, etc.) that would prevent them from “employment or contracts with China’s government or an entity controlled by China’s government” for five years after leaving office.

Our foreign policy would greatly benefit from such a move as entities such as the Canada-China Business Council have downgraded it with their myopic focus on “economic growth” at the expense of properly defining our national interests and diplomatic objectives.

Standing up to “China’s aggression” in relation to the rights of persecuted groups in China and activists in Hong Kong is also a part of the Tory platform.

“We must stand up to the Communist government of China. Our quarrel is not with the people of China—part of an ancient civilization that has contributed much to humanity,” the platform states. “We stand especially with Chinese-Canadians whose contributions to Canada are immeasurable and who are enduring an appalling rise in anti-Asian hate and discrimination. And we stand with Uyghur Muslims, Tibetans, Falun Gong practitioners, Hong Kongers, and Chinese Christians.”

Actions include using Canada’s Magnitsky law to sanction China’s worst human rights offenders and granting asylum to mainland Chinese proponents of freedom and persecuted minorities, including Tibetans, Falun Gong practitioners, and others. The platform also vows to “do everything to ensure that the 2022 Beijing Winter Olympics is not a platform for China’s global propaganda.”

When it comes to national security, Canada has relied on the United States for much of its security and strategic thinking, and has become comfortable with the idea that Washington will always be there to fill in the gaps. The Tory platform calls for more self-reliance by improving our military capacity, but it also emphasizes building “Canadian capabilities to contribute to foreign intelligence” to address such threats as foreign interference and economic coercion.

One key aspect of the world order that the platform gets right is the importance of the Indo-Pacific as a hot spot and the need to build alliances with countries in the region. Central to this strategy would be Canada’s participation in the Quadrilateral Security Dialogue, a network including the United States, Japan, Australia, and India that emphasizes co-ordination to deter China’s expansionism. This initiative, which would help expand Canada’s alliances, has hitherto been ignored by the Trudeau government.

The Trudeau government’s political posturing has undermined relations with India, thereby alienating an ally who will undoubtedly play a robust role in a Cold War-esque struggle with China. In contrast, if elected the Conservatives claim that deeper ties with India will be a dominant piece of their Indo-Pacific strategy. It’s currently a disquieting time for India, with the resurgence of the Taliban in Afghanistan providing opportunity for both China and Pakistan to extend their influence, isolate India, and intimidate it into making concessions that run counter to its interests. Canada and the West should strengthen relations with India to provide it with more leverage and a network to resist such pressure.

This is only a sample of the ideas for a prudent Canadian foreign policy offered by the Conservative platform. There’s much more to be discussed regarding the complexities of the world in which Canada finds itself and what its specific goals and interests should be, and to this end the Conservatives also wisely suggest the establishment of a National Interest Council.

Aside from providing a refreshing and well-thought-out vision, the Conservatives’ platform will hopefully force Justin Trudeau to defend his record, which has, if anything, emboldened our adversary in China. When it comes to positioning Canada as a leading force in any coalition meant to contain China, the Conservatives have convincingly presented themselves as the party most prepared to take on that task.