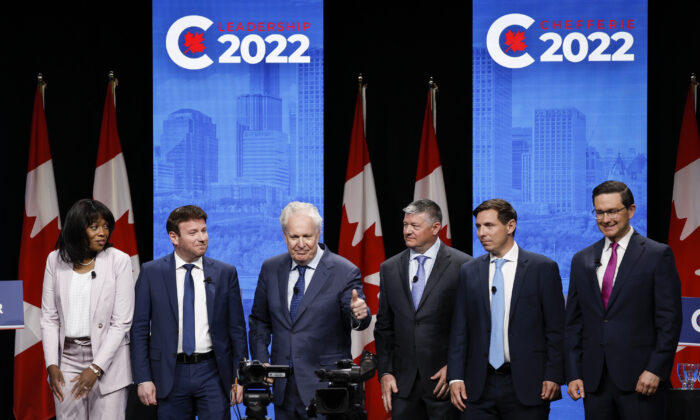 The Conservative Party of Canada (CPC) is adding a third leadership debate in August after launching a survey last week to gauge the interest of its members.

The decision to add a debate was made on July 20 by the Leadership Election Organizing Committee (LEOC).

A party spokesperson said that 24,000 members responded to the survey and were “overwhelmingly” in favour of having a third official debate.

LEOC Chair Ian Brodie sent an email to members on July 15 explaining that this third potential debate would be geared towards members who recently signed up since the two previous debates in May were held before the sign-up deadline of early June.

The party added a record number of new members during this leadership campaign.

Pierre Poilievre’s campaign has claimed it has brought in over 300,000 new members.

Brodie told members the third and last debate will be conducted on a smaller scale, in a private studio with no audience, and broadcasted over the internet.

Party rules dictate that leadership candidates must attend the official debates or face a fine.

Candidates have already participated in two official debates, one in English in Edmonton and a second in French in Laval, Que.

Former Quebec premier Jean Charest has been vocal about wanting a third debate.

“Are we going to do this third official debate?” Charest asked the party and LEOC in a July 20 tweet.

“Four of five [leadership] candidates are in favour, and many new CPC members have requested this. Let’s show Canadians our plan for the future.”

The campaign of Leslyn Lewis said she would attend as required, and a spokesman for Poilievre, the race’s perceived front-runner, has not yet responded as to his feelings about a third debate.

Former Ontario MPP Roman Baber called for another debate back in June while criticizing the format of the English debate.

“Canadians need to hear from us. But no Tom Clark this time,” he tweeted, in reference to the former journalist who acted as debate moderator.

The English debate featured personal questions such as the candidates’ favourite TV shows and included sad trombone noises for answers not respecting the format.

Other non-official debates have been held, but they were not attended by all candidates.

Recently disqualified candidate Patrick Brown had skipped the debate organized by the Canada Strong and Free Network conference in May, saying he was busy selling memberships.

A debate organized by the Western Standard media outlet on July 8 was only attended by Charest, Baber, and MP Scott Aitchison. Poilievre and Lewis said they were not available.

Details about the third official debate are expected to be released later on July 21.