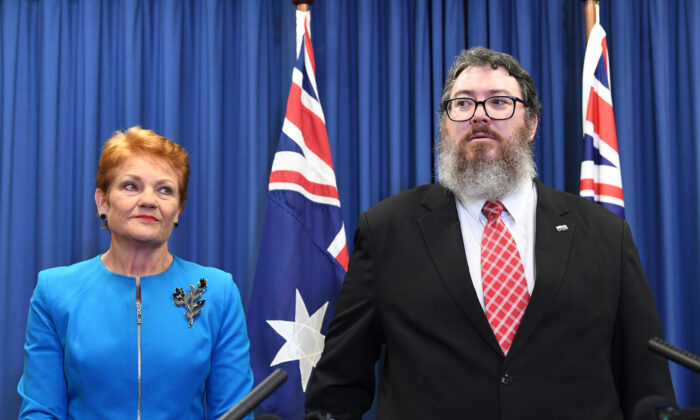 Hanson outlined these as major issues for One Nation at a press conference where she announced two candidates joining her on the Senate ticket for Queensland—former Liberal-National Party (LNP) MP George Christensen and former Adani executive Raj Guruswamy.

“[Christensen] is a fighter for Queensland and has done so on the floor of Parliament for many years,” Hanson told reporters in Brisbane on April 13.

“I am proud to see that George has now joined the One Nation team. I think that as a team we can actually have a big impact on policy in Queensland.”

Christensen, who left his safe LNP seat, expressed his disenchantment with the LNP’s direction, including net zero climate policies and “destructive pandemic policies.”

He said One Nation’s values were much more aligned with his conservative nature.

“The push for net-zero, I think is going to mean Net Zero jobs in regions like Central Queensland in North Queensland,” Christensen said.

“I’m passionate about vaccine mandates, the response to governments around COVID which was a complete and utter overreach, blowing up freedoms and rights and all the rest of it, jobs in the economy—for a virus with a 0.27 percent infection fatality rate.”

Along with Christensen, One Nation will stand 151 candidates in the election, covering every seat across the country for the first time in its 25-year history.

“The people have indicated they have had enough of the major political parties—the Liberals, the Labor, the Greens, and the Nationals,” Hanson said.

Labor came under scrutiny after the country’s spy agency revealed it had disrupted a plot by the Chinese Communist Party to install Labor candidates in the federal election.

“We need to ensure that we have national security. Because if Labor gets in, in the lower house government, I don’t believe they will address the concerns that I have with regards to China,” Hanson said.

The One Nation leader also wants Australia to look after its “own backyard” by taking care of teachers and health workers before it looks to import skill migrants from overseas.

Hanson said Queensland was struggling to find teachers, nurses, and doctors, amid vaccine mandates, but decried the governments’ plan to fill those workforce gaps by importing skilled migrants. She said this was “not the right answer ” and characterised it as throwing “good Australians on the scrap heap” because they refuse to have the jab.

With his sights set on cutting through red tape for business, Raj Guruswamy, who played a key role in establishing Adani’s operations in Queensland, will join the One Nation Senate ticket.

“Raj is an expert with a great deal of experience in the transport and resource industries in Australia and overseas, and in dealing with government bureaucracies and red tape,” Hanson said in a release.

“We will continue to put Australia and Australians first by advocating for immigration to be reduced to sustainable levels, ensuring foreign-owned multinationals operating in Australia pay their fair share of tax, and reforming Australia’s family law and child support systems,” she added.

“And we will demand a Royal Commission into the management of the pandemic by all Australian governments.”

Hanson also discussed the importance of coal and gas for Queensland’s economy, saying her party’s goal is to build more coal-fired power stations.

Meanwhile, national Greens leader Adam Bandt, who will challenge One Nation in Queensland for the balance of power in the Senate, said his goal is to end the coal and gas industry in order to achieve net zero goals.

“No more coal, no more gas. When we are in the balance of power after the election in the Senate and the House and have kicked the Liberals out, this will be our key demand,” Bandt told the National Press Club on April 13.

The Greens plan to tax billionaires to fund their election promises to pay for the dental plan costing $8 billion a year for 10 years.

The left-wing party also wants a six percent tax on the wealth of Australia’s more than 130 billionaires and a corporate “super profits tax,” which would force businesses to hand over profits after they make $100 million.