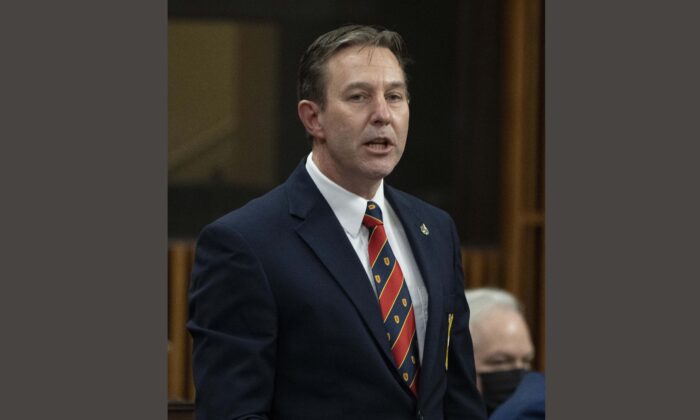 Conservatives are criticizing public health officials for not providing metrics supporting vaccine mandates to MPs, with their lead advisor on COVID-19 saying it’s “unbearable” that the information isn’t provided.

Conservative MP Michael Barrett, his party’s shadow minister of health, sought answers from public health officials regarding a timeline or benchmark for the dropping of mandates during a meeting of the House of Commons Standing Committee on Health on June 8.

Barrett asked Public Health Agency of Canada president Dr. Harpreet S. Kochhar if he could “provide what the goalposts are so Canadians know when we’ve got the touchdown.”

“Are we talking about vaccinations as the metric that you’re using? Or is it about wastewater surveillance? Is it about hospital capacity?” Barrett said.

Kochhar did not provide any figures.

“This is a combination of different metrics. There aren’t any specific numbers which we could actually say because it depends upon the activity of the virus in the different communities, as well as the different settings, and also the protection which is provided to the population from vaccination and other public health measures like masking, hand washing, and others,” he said.

The lack of specifics provided by PHAC to the committee drew scorn from Tory MP Stephen Ellis, his party’s deputy shadow minister of health and special adviser on COVID-19.

“We talked a lot about metrics and numbers. … What is it that makes the Public Health Agency of Canada afraid to share those numbers with Canadians? What are you afraid of?” Ellis asked Chief Public Health Officer Dr. Theresa Tam.

“People need to understand the complexity of public health decision making and you cannot make these very complex decisions based on a singular metrics,” replied Tam. “The decision-makers have to take into account a number of metrics. Even looking at health care capacity, that is different across Canada.”

Ellis is a physician, as well as Liberal MPs Marcus Powlowski and Brendan Hanley. Powlowski took a public stance this week against the mandates.

“I find that utterly shocking, dismissive, and quite frankly unbearable that you continue to refuse to provide this, and there has to be some metrics, Dr. Tam, I mean, this is utterly ridiculous. And to not provide them to this committee is quite frankly, embarrassing,” Ellis said.

Unvaccinated Canadians are currently unable to board a plane, a train, and some types of marine vessels. They also cannot work in the public service, the federal police, or the military.

Some federally-regulated sectors have also imposed vaccine mandates on staff, but others like banks have abandoned them last month.

The Liberal government has maintained that mandates are continuously being reviewed, but no details have been publicly released.

Pressure from inside the Liberal Party has been combined in recent days with pressure from the tourism sector, including domestic and international airlines, which want travel restrictions lifted.

The government announced on June 10 that it was temporarily suspending random COVID-19 testing at airports to alleviate bottlenecks.

On the same day, the United States announced it was lifting the testing requirement for air travellers entering the country.