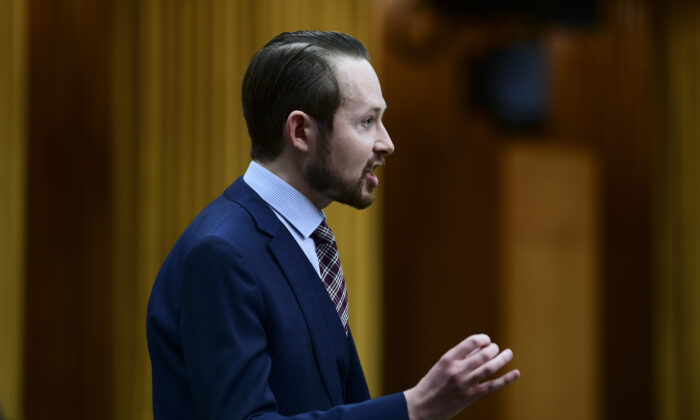 Conservative member of Parliament Michael Cooper rises during question period in the House of Commons on Parliament Hill in Ottawa, Canada, on March 12, 2021. (The Canadian Press/Sean Kilpatrick)
Canada

Conservative MP Michael Cooper on Thursday introduced to the House of Commons the Canada-Taiwan Relations Framework Act, a bill that aims to strengthen bilateral relations between the two countries and support Taiwan’s participation in international organizations.

“It is in Canada’s economic and strategic interest to strengthen our relationship with Taiwan,” Cooper said in an emailed statement. “This legislation recognizes the reality that Taiwan, a vibrant democracy and economic powerhouse of 23 million people, is here to stay. It’s long past due that Canada’s policy towards Taiwan caught up with that reality.”

Taiwan, officially the Republic of China (ROC), is Canada’s 13th largest trading partner, with $8 billion in annual bilateral trade. Roughly 200,000 Taiwanese reside in Canada, while nearly 16,000 Canadians live in Taiwan, which is the fourth largest Canadian community in the world.

Despite the two country’s intimate economic and social relations, Canada has had no formal diplomatic relationship with Taiwan for the past 51 years, and has not recognized Taiwan as a sovereign state.

“The absence of recognition, the absence of diplomatic relations, the absence of any formal relationship has created challenges, in terms of the interactions between Canada and Taiwan, both legal and pragmatic,” Cooper said in a Thursday press conference. “There is a real void that exists. And it is a void that this legislation seeks to fill.”

Beijing claims Taiwan as part of its territory and has continuously tried to assert control over the self-governed island.

Cooper said he’s not yet received any pushback from Beijing for the bill.

“I don’t believe that Canada should govern its relationship with Taiwan, based upon the position of the Chinese Communist regime. Taiwan is simply too important, it’s time that we move forward to engage with Taiwan and enhance relations with Taiwan,” he said.

Cooper’s bill also calls for the renaming the Taipei Economic and Cultural Office in Canada to Taiwan Representative Office to reflect its function as Taiwan’s de facto embassy.

Beijing has continually tried to sideline Taiwan on the international stage by pushing countries around the world to adopt the “One China policy,” which rejects Taiwan as a sovereign state independent of communist China. Under this policy, Taiwan has constantly been denied participation in international organizations and forums.

Cooper noted that his bill remains consistent with Canada’s One China policy, as in Canada’s Joint Communique with China that set out that policy, Ottawa “merely ‘takes note’ Beijing’s contention that Taiwan is an inalienable part of the People’s Republic of China.”

“In merely ‘taking note,’ Canada’s One China policy does not expressly support that contention, nor does it challenge that contention,” Cooper said. “The policy was quite deliberately designed to provide significant flexibility in conducting relations both with the People’s Republic of China and that of Taiwan.”

He said Taiwan is “a model for the world,” particularly in the respect of handling the COVID-19 pandemic over the past 15 months.

With a population of roughly 23 million people, Taiwan has remained largely open in the COVID-19 pandemic, while having a total of 13,584 confirmed cases, and roughly 500 deaths as of Thursday.

Cooper said his bill also provides a framework for the Government of Canada to support Taiwan’s participation in international organizations and forums, such as the World Health Organization (WHO) and the International Civil Aviation Organization (ICAO).

“With respect to WHO and ICAO, let me just say that at a time when we are in the middle of a pandemic. It is absurd that Taiwan would be excluded having regard for the significant expertise that it brings to the table, and more broadly, from the standpoint of global public health,” Cooper said.

“Similarly with respect to ICAO, from a global aviation safety standpoint. Taiwan is home to the 11th busiest airport in the world in Taipei (Taiwan’s capital city),” Cooper said. “So, it is important that Taiwan be able to fully participate in both organizations.”