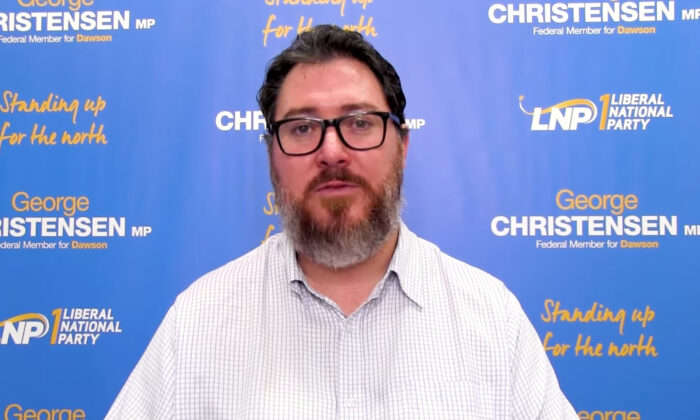 Conservative Australian MP George Christensen, in a surprise move, has changed plans to retire from politics and will instead run for Pauline Hanson’s One Nation party at the federal election on May 21.

The announcement comes less than a week after Christensen resigned from the Nationals, which traditionally represents regional voters and which, together with the centre-right Liberals, form the LNP coalition—the incumbent government. It also comes almost a year since he announced that he would opt out of politics to spend more time with his family.

Senator Pauline Hanson and Christensen will hold a press conference on April 13 to formally announce the move.

Christensen told The Courier Mail that Hanson’s One Nation party were more aligned to his values as a conservative than the LNP.

“The more I queried into One Nation’s policies and looked at their constitution, their core beliefs, the things that Pauline has been campaigning on recently, just about everything aligned with my views,” he said.

Christensen revealed that his change of heart came after intense lobbying over the last few months from people who felt “let down” by the LNP and could not support centre-left Labor, the only other major party.

The member for the North Queensland electorate of Dawson became disenchanted with the LNP over the course of the pandemic, objecting to state pandemic measures such as lockdowns, protective mask mandates, and vaccine mandates; and speaking out against the at-times authoritarian nature of their enforcement by police.

In fact, Christensen declared in November 2021 that he would withhold votes on government bills in the federal lower house in protest of restrictions that locked unvaccinated people out of society, banning them from a swath of venues and services.

Similarly, One Nation senators Hanson and Malcolm Roberts, each from the state of Queensland, vowed in February to vote against government bills in the federal upper house for the same reason.

Roberts welcomed Christensen to One Nation, writing on Twitter, “Glad to have you onboard and staying on in the fight for freedom.”

Hanson has confirmed Christensen’s candidacy. However, it is not yet clear if he will run again for his seat of Dawson, for which One Nation already has candidate Julie Hall, or if he will contest another lower house seat or run for a Senate seat.

“I know it’s a sacrifice to him and his family. I know that, but I’m not going to apologise because I want good people standing beside me that are going to deliver for the Australian people,” Hanson said.

Christensen has been the MP for Dawson since 2010 and won his seat with a margin of 14.6 percent in 2019, with an 11.2 percent swing thanks to preferences from One Nation, Katter’s Australian Party, and Fraser Anning’s Conservative National Party.

One Nation has a strong support base in Queensland, sitting between 11 percent and 17 percent at the 2019 election.