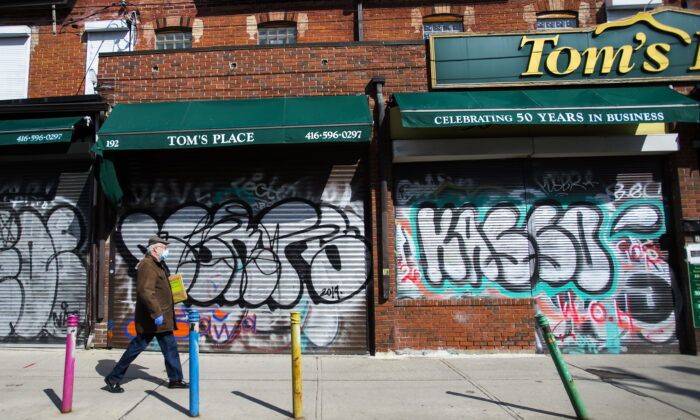 Conservative MP David Sweet—the first federal elected official from his party—has joined Ontario MPP Roman Baber in calling for an end to COVID-19 lockdowns and moving the province back to the “Green” zone.

“Lockdowns are harmful to the physical and psychological well being of Ontarians,” Sweet said at a press conference on Wednesday. “We should focus on protecting the vulnerable in long-term care homes and congregate living settings.”

Sweet is the latest Canadian politician to break ranks with the broadly united front elected officials have presented on the need for sweeping restrictions on schools, recreation, businesses and travel to slow the spread of COVID−19.

Baber, who was removed by Premier Doug Ford from the Progressive Conservative caucus in January due to a letter he sent to Ford telling him that lockdowns are “deadlier than COVID,” said the health measures need to be more targeted and Ontarians have to return to normal life.

“David and I are saying publicly what many elected representatives are saying privately. The effects of the lockdown are devastating to the health, mental health, and the well being of Ontarians. We need to protect the long-term care homes and let Ontarians go back to a semblance of normal. That’s the best thing to do for their health,” Baber said.

Calls to end lockdowns have been mounting as more business groups, activists, politicians, and religious leaders continue to step forward to decry the restrictions.

The Canadian Federation of Independent Business (CFIB) released a statement on Wednesday, urging Ford to ease his restrictions after “100 consecutive days in COVID-19 winter lockdowns—the longest in North America” in the Toronto and Peel regions.

Instead of lockdowns, the CFIB said the provincial government can put in place other health measures including rapid testing, screening, and contact tracing in all regions across Ontario, while at the same time improve all the economic support programs necessary for small businesses to survive.

In early February, nearly 500 small-business owners across Canada protested against orders that said “non-essential” businesses must remain closed, and opened their doors for business on Feb. 11 in a campaign called “Together We Can End the Lockdowns.”

Around the same period, a new group called the End the Lockdowns National Caucus was formed in response to “the COVID-19 restrictions launched by governments across the country that cause ‘unprecedented mass violations of Canadian’s Charter Rights.’”

“After a year of the pandemic, people are frustrated and tired. Frustration is understandable but it should not lead to counterproductive behaviour,” he said in a statement.

“My view and the view of the (Conservative Party of Canada) is that we respect the work being done by our premiers and health officials throughout this crisis.”