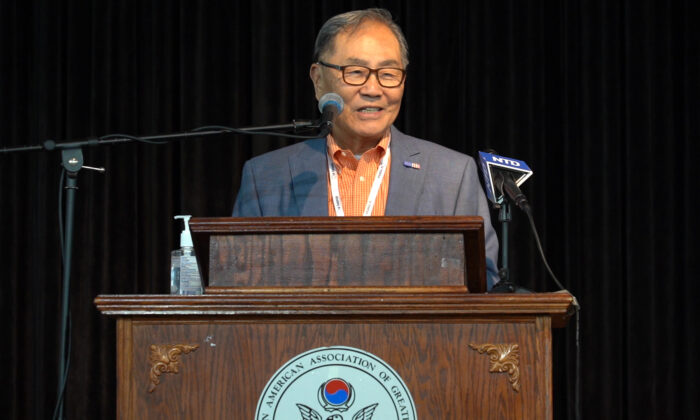 Our America CMC (Conservative Minority Conference) held a speaking event in the northern Atlanta suburb of Norcross on Jan. 25.

Five speakers spoke at the conference on topics ranging from the danger of conservative values crumbling in America, to the imminent threat posed by the Chinese Communist Party (CCP) and their inhumane measures in pandemic control, to how the Republican Party should stem the trend of the South sliding towards the Democrats.

The event venue was the auditorium of the Korean American Association of Greater Atlanta. Roughly a hundred people were in attendance, many of whom were Asian Americans and African Americans, as the name of the event could suggest. Also present were many Republican candidates running for different government offices in Georgia.

The keynote speaker was Sunny Park, a prominent entrepreneur and philanthropist from Atlanta. A Korean American born in South Korea, Park described how he was awed and impressed by the generosity displayed by the American soldiers during the Korean War when they helped distribute supplies to poverty-stricken crowds. That observation gave him the aspiration to become “one of the best Americans” and motivated him to come to the United States in 1974.

On the very same day that Park arrived in the United States, he found a job cleaning a steakhouse for $1.80 an hour, equivalent to a two-day wage in South Korea at the time. He thanked God for bringing him to America.

As America had been generous to him, he wanted to pay back and had the dream to one day pay a million dollars in taxes. It took him 22 years to achieve that goal. Today with his successful company, General Building Maintenance, he pays more than a million dollars in federal income taxes every year.

Park said he came for the opportunities the country offered to everyone regardless of where one might be from. To ensure that the same opportunities would exist for future generations, Park said the only way would be with conservatism and not liberalism.

Traditional American values are losing ground, he emphasized, and people aren’t doing enough. “So many Americans feel like they’re living in a house by renting. America is not your country but you’re just renting the house.” If the roof should leak, a tenant would simply call for maintenance and would take no responsibility. However, a house owner would get on the roof and not stop until the leak is fixed. “This is your house, this is your country, and this is my country. We are all together and we’re going to stop the leaks,“ he closed.

Next up was Will Coggin, a U.S.-China policy expert who at one time lived in Beijing. He is the managing director of the American Security Institute which runs the website ChinaOwnsUs.com.

Coggin said that long ago the CCP had established the goal to totally supplant the United States as the dominant global power and for decades had been quietly making advances. Instead of achieving this goal via the more visible method of expanding hard power such as the military, the CCP took the surreptitious approach by growing its soft power under the radar.

He pointed out that the CCP had honed in on key high-tech industries and had been gaining advantages through corporate espionage and luring over technical experts with bribes. The CCP has also had over 2,000 corporate acquisitions and direct investments in the entertainment, technology, and industrial arenas. The CCP has accomplished to make the United States reliant on it for critical goods such as antibiotics, PPE, and rare earth minerals. The CCP has also demonstrated outright ambition to take over Taiwan which would then give it a chokehold on the global supply of computer chips.

In addition to the industrial and commercial fronts, Coggin added that the CCP had also gained significant influence in American mainstream media. It had also planted numerous Confucius Institutes in the American educational system to paint a favorable picture of China in America’s young minds.

Going along with Park’s analogy of America as a house, Coggin said, “the Chinese Communist Party is more of a termite problem. They eat away the foundation of a house, or a country in this case. And they do it very quietly.”

Detained and Held in China

Dr. Sean Lin is a microbiologist. He is a member of the China Coalition for Religious Freedom, as well as the Committee on Present Danger: China. (Disclosure: Dr. Lin also works for The Epoch Times and NTD TV as a senior analyst and commentator on China affairs and public health topics.)

In the year 2000, Lin and his wife were students at the University of Alabama and Georgia Tech. They traveled back to China and were detained and held because of their faith in Falun Gong, a spiritual practice banned and persecuted by the CCP. Only with the collective effort of petitioners in Georgia and Alabama, reaching out to Congress members were they released by the Chinese regime at the behest of the U.S. Department of State. Grateful for the American people bringing him back to freedom, Lin decided to join the U.S. Army to show his appreciation. While in the Army he served as the laboratory director for the viral disease branch at Walter Reed Army Institute of Research.

With his background in microbiology and public health, Lin has produced many commentary videos on YouTube on the topic of COVID-19. Many viewers would leave comments singing praises of how the CCP had put the disease under control with strict lockdowns. Even many American public health officials also held positive views of China’s apparent “success”, disregarding that the CCP’s lockdown measures would be outright brutal.

Despite evidence showing the Chinese regime lied about figures related to COVID-19 in China, Lin said many people still believed such claims. The CCP bragged about their accomplishment and claim that as proof of the advantage of an authoritarian regime. Something didn’t feel right to Lin but he didn’t know how to explain it to others.

Until one day he had an epiphany, “The Chinese government is using tactics for dealing with animal infectious disease outbreak on humans.” When an outbreak would occur on a chicken farm, the farmer would not hesitate to cull a portion of the chicken population to prevent the further spread of the disease.

Essentially the CCP has no problem resorting to cruel and drastic measures to control the disease, even if it means treating their citizens as animals, for the sake of maintaining economic stability which translates to the stability of its power.

Author, filmmaker, and public speaker, Trevor Loudon also spoke at the conference. He is known for his extensive research into the infiltration of extreme leftist and Marxist influence in western society and in particular the United States. Loudon is a New Zealand native and now resides in the United States. (Disclosure: Loudon’s commentary videos appear on Epoch TV.)

Loudon started by saying that what Coggin and Lin had shared was true, “the Chinese are at war with Americans. The Communist Party of China wants to finish this country off.”

He further explained that the CCP’s foray to influence American elections started decades ago. Back in 1984 and 1988, Jesse Jackson’s campaign organization for the presidency, the Rainbow Coalition, was run by pro-China communists. Loudon said that Jackson’s goal was to mobilize the radical ethnic and social minorities into the so-called New American Majority and drive a leftist agenda in politics.

These encroachment tactics have been prevalent in elections throughout the years. Loudon said it was movements such as these that turned Virginia, a traditionally deep-red state into deep blue until the most recent election. He admonished that the objective of the leftist groups is to turn three or four of the southern states blue and then there would never be another Republican president and America would essentially be a one-party socialist state controlled by China. The minority populations in those states are considered the means of how they’d get there.

The irony is, as Loudon put it, most minority people are socially conservative and care much about social issues such as religion, education, and endangerment of traditional family values. However, the Republican Party’s weakness is to only focus on fiscal responsibility and not addressing social issues which would attract minority voters. He urged the GOP to campaign on addressing those social issues.

The final speaker was Reverend Dean Nelson, who was instrumental in helping Glenn Youngkin successfully wrestle the Virginia governorship away from incumbent Democrat Terry McAuliffe. Nelson is also the chairman of the Frederick Douglass Foundation.

Nelson spoke highly of Reverend Melvin Everson, also present at the conference, as his inspiration to engage in political activism. Almost 20 years ago Nelson took part in Everson’s election campaign in which they saw Everson successfully become the first African American Republican member to have won a seat at the Georgia State House in a contested election since the Reconstruction.

Nelson emphasized that it is this kind of activism those attending the conference need to get involved in if they want to ensure a prosperous America for our posterity.

Echoing speakers before him, Nelson warned that there are those who have infiltrated into our system with the intention to dissolve the traditional, religious, and constitution-respecting culture. He pointed to the CRT curriculum forced into classrooms today, as well as the sexual assault scandals in the Loudon County school board in Virginia.

Nelson agreed with Loudon’s statement that most minorities are actually socially conservative but the GOP had failed to capture their votes. He said that Donald Trump was successful in his 2016 campaign because he broke the Republican mold and reached out to minorities.

Julie Cho is the organizer and executive director of this event and overall Our America CMC organization. She first held this event as a three-day conference in Dallas in September 2021 and attendees came from all over the country. At the request of those who attended she decided to take the conference nationwide.

Cho was the Republican candidate for the 18th district for the Illinois State House in 2018. Being born in South Korea, she is well aware of the threat of communism coming from the north. She thinks this kind of event is important because “80 percent  of millennials support communism, and we as the American society don’t fully understand the true nature and threat of communism.” She hopes to educate the American public with more such conferences.