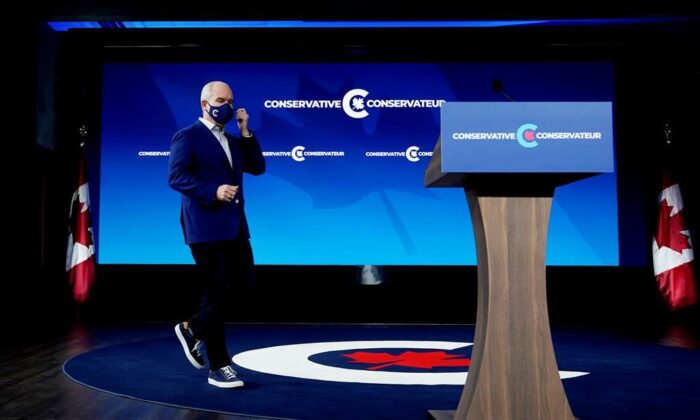 Conservative Leader Erin O'Toole walks on stage as he prepares to speak in Ottawa on September 21, 2021. (The Canadian Press/Adrian Wyld)
Canada

OTTAWA—Conservative Leader Erin O’Toole will face his caucus today for the first time since his party’s disappointing election defeat two weeks ago.

The 119 Conservative MPs are set to gather in person in Ottawa where, among other things, they’ll have to decide whether they want the power to review O’Toole’s leadership.

Under legislation passed in 2015, each party’s caucus is required to decide after an election whether it wants to empower its members to trigger a leadership review, which requires a written notice backed by at least 20 percent of caucus.

The rule also allows MPs to elect their own caucus chair and make decisions about whether someone should be expelled from the fold.

A spokeswoman for O’Toole says the leader has always supported these legislative provisions and believes members should vote as they see fit.

Conservatives finished the Sept. 20 election with two fewer seats than they won in 2019 under former leader Andrew Scheer, who resigned as leader under intense pressure shortly after the federal election.

O’Toole’s team also lost five incumbents who were visible minorities and failed to make the hoped-for gains in the key battlegrounds of the Greater Toronto Area, Metro Vancouver and Quebec.

During the campaign, O’Toole made the unusual move of adding a footnote to his election platform promise to repeal a Liberal ban on so-called assault rifles that covers some 1,500 types of firearms. He ultimately decided to maintain the ban—despite party policy stating otherwise—and instead subject it to a review.

Even before entering the campaign, O’Toole’s move to put a more moderate stamp on the party by distancing itself from past leaders in hopes of gaining more seats in Quebec and Ontario left some in the Conservative movement, particularly those living in its western heartland, feeling less than impressed.

A member of the party’s national council from Ontario has already launched an online petition to collect signatures from Conservatives who feel O’Toole has betrayed the party’s core values and want to vote on his leadership earlier than the currently scheduled review in 2023.

“It’s not surprising that many mainstream media types are telling Conservatives that we should just be happy with our 2nd place finish in last week’s election,” re-elected British Columbia Conservative MP Mark Strahl recently tweeted.

“Second place is exactly where they want us to be. Conservative members expect (first) and will never be satisfied with (second).”

While concerns are being voiced about the party’s election performance, O’Toole argues that, under his leadership, Conservatives grew their share of the vote in Ontario and Quebec by three and four percentage points, respectively.

“That means the party has already become more competitive over the past year, and we are now within striking distance—the seats come after the increase in vote share,” he said in a recent party fundraising email.

O’Toole also touted the fact that the party gained a handful of seats in Atlantic Canada, came within 2,000 votes in some 30 ridings and now boasts a younger caucus, with more women and LGBTQ representation.

Some of his MPs, such as newly elected Ontario representative Leslyn Lewis, a favourite among the party’s grassroots and social conservatives in last year’s leadership race, have taken to social media to say he deserves to be spared the same fate as Scheer.

Others are lining up to say the last thing the party needs in another minority Parliament is to find itself starting from scratch by launching a new leadership contest.

“As leader, however, I know when we don’t win an election, we need to ask ourselves why. I plan to do just that,” O’Toole said in the fundraising pitch.

He has pledged to hold a review of the election loss, but has yet to announce what the scope will be and who will lead the post-mortem.