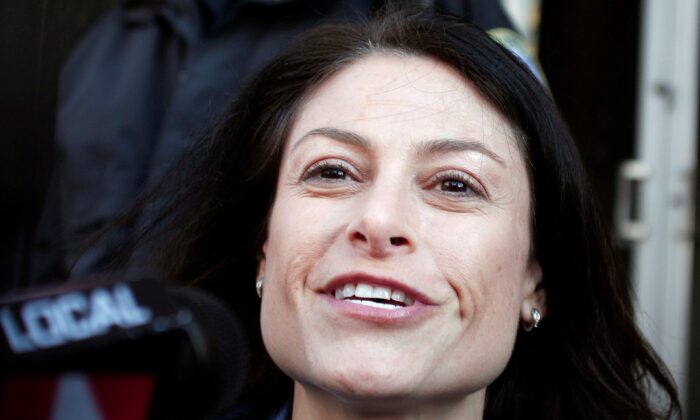 Dana Nessel, then a private attorney, in Detroit, Mich., on Oct. 16, 2013. In 2018 Nessel was elected Mich. attorney general. (Bill Pugliano/Getty Images)
US News

A conservative group that claims it is being targeted by Michigan authorities for its political views on the basis of controversial research by the Southern Poverty Law Center (SPLC) has won a round in court, after a federal judge denied state officials’ request to dismiss the lawsuit.

The Ann Arbor, Michigan-based American Freedom Law Center (AFLC), which describes itself as “a nonprofit Judeo-Christian law firm that fights for faith and freedom through litigation, education, and public policy initiatives,” is suing Michigan over its decision to rely on the SPLC’s research that designates it as an “anti-Muslim hate group.”

One of the reasons the SPLC gives for the label is that AFLC “authored an amicus brief in support of” President Donald Trump’s travel ban affecting several terrorist-prone nations, some of which were Muslim-majority countries.

Critics say the well-funded Montgomery, Alabama-based SPLC, a public-interest law firm, unfairly tars conservatives as racist as a matter of policy, treating all opposition to illegal or legal immigration, open borders, and multiculturalism as hate and all political expression of those views as hate speech.

In the case cited as American Freedom Law Center Inc. v. Nessel and Arbulu, government defendants asked Judge Paul L. Maloney of U.S. District Court for the Western District of Michigan to dismiss the case. Dana Nessel is the Michigan attorney general, and Agustin Arbulu was the director of the Michigan Department of Civil Rights. Arbulu was fired by the Michigan Civil Rights Commission in August 2019 for “his comments objectifying women,” the Detroit Free Press reported at the time.

In a Jan. 15 ruling, Maloney refused motions to dismiss. The case will move to the discovery stage, which is likely to make public communications between the Michigan officials and the SPLC that shed light on the officials’ intentions.

Maloney wrote that the AFLC, which says it engages in “constitutionally-protected activities,” has established “both a harm to its reputation and a credible fear that it will be targeted by the State of Michigan.”

AFLC’s statement that a database being assembled by the state “will not be used to track actual crimes, but incidents,” is worrisome, the judge noted. So even if AFLC is never prosecuted, the group fears “the information gathered through the surveillance and investigation would be recorded in the database and might be used against AFLC in other ways.”

Robert Muise, AFLC co-founder and lead counsel in the lawsuit, told The Epoch Times that he hopes the judge’s ruling sends a message to the Michigan attorney general that she “will not be allowed to weaponize her office to target political opponents.”

Muise said it was disturbing that the top law enforcement officer for the state is relying on hate-group lists put together by the “radically partisan Southern Poverty Law Center,” which he described as a “political propaganda machine for left-wing activists.”

The Constitution is triggered because Michigan is using its resources to conduct investigations based on “political hyperbole.”

“This is a page right out of George Orwell’s ‘Nineteen Eighty-Four,’” he said, referring to the famous dystopian novel about a totalitarian future.

Robert Weissberg, a professor emeritus of political science at the University of Illinois at Urbana-Champaign, told The Epoch Times he was delighted that the lawsuit remains alive.

“The ‘war on hate’ is fundamental to the totalitarian assault on freedom. Disagreement has been transformed into ‘hate’ and ‘hate’ has been converted into the first step in genocide and the like. This intellectual transformation has been occurring for decades and, like carbon monoxide poisoning, it is barely noticed until just before death,” he said.

As of press time, neither the SPLC nor Nessel’s office had responded to requests for comment.

In IRS filings for the tax year ending on Oct. 31, 2018, the SPLC reported $518 million in assets, which makes it wealthier than the American Civil Liberties Union Foundation Inc. and Planned Parenthood Federation of America Inc., The Epoch Times previously reported.

Correction: A previous version of this article included an incorrect headline indicating that the Southern Poverty Law Center was a party to the suit brought by the American Freedom Law Center. The Epoch Times regrets the error.