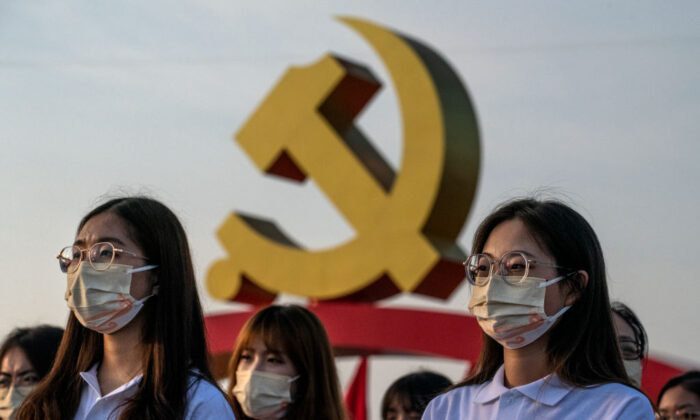 Chinese women stand in front of a large Communist Party logo at a ceremony marking the 100th anniversary of the Communist Party, at Tiananmen Square in Beijing, on July 1, 2021. (Kevin Frayer/Getty Images)
Education & Family

Emerson College has suspended a conservative student group after its members handed out stickers that ridicule the Chinese Communist Party (CCP).

According to the Emerson chapter of Turning Point USA, the group is under investigation for allegedly violating the school’s code of conduct after an event on Sept. 29, during which stickers featuring a hammer and sickle with the caption “CHINA KINDA SUS” were distributed on the Boston, Massachusetts, campus.

“Sus,” which is short for “suspicious,” is an expression used in popular online game “Among Us,” where players have to actively look out for any suspicious behavior in order to identify the “impostor” who is sabotaging a spaceship and killing unsuspecting crew members.

The sticker thus portrays the CCP as the “impostor” whose suspicious behaviors must be made known to the international community before any nation falls victim to the communist regime. The sarcastic meme, however, has been interpreted by some Emerson students and administrators as promoting hatred toward people of Chinese or Asian descent.

“It has come to my attention that several individuals were distributing stickers yesterday that included anti-Chinese messaging that is inconsistent with the College’s values and will not be tolerated on our campus,” Emerson’s Interim President William Gilligan said in a Sept. 30 letter to the campus community.

“At this time in particular, when there has been a rise in anti-Asian sentiment, it is important to denounce all instances of anti-Asian bigotry and hate, and affirm our support and solidarity with the Asian and Asian-American community on campuses and around the world,” he added.

Emerson’s Office of International Student Affairs has also sent out an email consoling foreign students about the incident. In the message obtained by the Foundation for Individual Rights in Education (FIRE), the office alleged that the TPUSA stickers “expressed anti-China hate” and vowed to stand with students from China “to denounce the use of free speech platforms for statements that are used as xenophobic weapons.”

In response to the outrage, the TPUSA Emerson posted a video to Instagram, clarifying that the stickers are meant to criticize China’s communist regime, and “have nothing to do with Asian ethnicity or Asian culture.”

“The sticker intends to criticize the Chinese government, the regime responsible for the largest genocide in the world right now,” said TPUSA Vice President Kjersten Lynum, who identifies as Chinese-Singaporean. “The sticker contains the symbol of the Chinese Communist Party, which should make it obvious that it’s about the tyrannical party that rules China, not the people who live or come from that country.”

FIRE, an advocacy group focusing on First Amendment rights on college campuses, voiced support for the TPUSA Emerson, arguing that while the private institution doesn’t have a constitutional burden, it should drop the investigation and reaffirm its commitment of free expression.

“Criticism of governments is core political expression protected by principles of free expression that Emerson pledges to uphold,” the organization wrote in a letter to Emerson.

In response to a request for comment, the Emerson College said it “takes these matters seriously, and is addressing reports of the events on campus.”