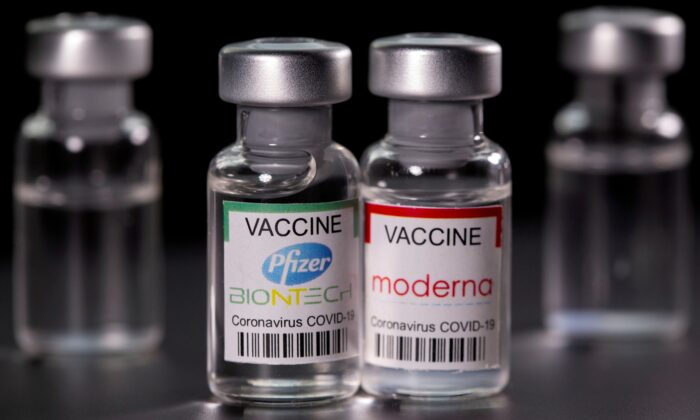 A Canadian paper published in a peer-reviewed international journal proposes that “conscientious objection” is an adequate reason to refuse mRNA vaccines as a preventive treatment against COVID-19.

The authors present the scientific basis for their proposal, explaining that the vaccines consist of artificial mRNAs wrapped in lipid nanoparticles that force the recipient’s cells to produce, “against their nature, a biological active viral protein” of an unknown dose and quality.

“Unlike a drug produced in a pharmaceutical factory and formulated at a known dose and a well-defined protein product profile, the mRNA vaccine acts as a pro-drug encoding for the viral Spike protein of the virus to be produced by our own cells; both the dose and the quality of the proteins produced are unknown,” wrote the authors of the paper, published on Aug. 23 in the International Journal of Vaccine Theory, Practice, and Research.

“We also ignore the distribution of the lipid nanoparticles carrying this mRNA in our body,” they added, stating that they consider “the ‘conscientious objection’ raised by the above considerations is a reason enough to refuse mRNA vaccines or similar technologies as a preventive treatment against COVID-19.”

The five co-authors include Dr. Patrick Provost and Dr. Nicolas Derome—two professors who were recently suspended by Quebec’s Laval University for questioning the need to vaccinate children against COVID-19.

The other authors are Dr. Bernard Massie, retired director general of the Human Health Therapeutics Research Centre at the National Research Council of Canada, Dr. Christian Linard, a professor at the department of chiropractic at the University of Quebec at Trois-Rivières, and Dr. Jean Caron, a retired professor at McGill University’s department of psychiatry.

According to the paper, some vaccines, such as Sinovac Biotech’s CoronaVac and Bharat Biotech BBV152, were produced on the basis of traditional technology using inactivated virus, while other injectable formulations were based on viral vectors—such as the vaccines produced by AstraZeneca, Janssen, and CanSino Biotech—or experimental genetic products based on mRNA as developed by Pfizer-BioNTech and Moderna.

The authors said there are several reasons for using conscientious objection—an objection based on moral or religious grounds—to refuse these mRNA vaccines, which they said “make human cells perform a function that they would not normally execute: the production and expression of a foreign viral protein on their surface.”

To begin with, they said, both proponents and opponents of the new mRNA technology agree it is “unnatural,” and in addition, the technology’s long-term effects are “as yet either completely unknown or just beginning to come to light.”

While the technology has been used against certain cancers and infectious diseases, before COVID-19 “no such technology has ever been used as a prophylactic drug” for preventing a disease, the authors said, adding that several vaccines received conditional approvals “in record time” until the end of their experimental phase.

“Although the definition of ‘vaccine’ has recently been changed to include mRNA and closely related genetic vectoring products, these experimental formulations are closer to gene therapy platforms rather than the long established and familiar vaccines aimed at polio or measles,” they wrote.

Whereas traditional vaccines aim to deliver a dose of some active component, such as dead or weakened pathogens, into the human body intended to be detected by specialized immune defence cells to induce protection, the theory behind both mRNA and viral vector injections is to cause the body to produce multiple copies of the coronavirus spike protein.

“Such traditional vaccines have never required, in theory or in practice, 100% coverage of the population to reduce or stop the spread of a targeted virus,” they said. “In contrast, the mRNA injections aimed at COVID-19 neither prevent contagion nor transmission, despite repeated injections.”

The authors also pointed to a discrepancy between the mRNA vaccines’ claimed effects and the real-world infection rate.

“Countries with the highest vaccine coverage have the highest number of infections by the targeted virus,” they said, pointing to another study that found COVID-19 infections “appear to be unrelated to vaccination levels across 68 countries and 2,947 United States counties.”

The mandatory vaccination measures introduced by governments around the world during the pandemic is another reason for conscientious objection of mRNA vaccines.

Despite the “scientific uncertainties” surrounding the use of mRNA vaccines, the authors noted that many countries have imposed mandatory vaccination policies such as a vaccination passport. In Canada, mandatory vaccination was imposed from October 2021 to June 2022 on the public service and federally regulated workplaces. Unvaccinated individuals were also not permitted to board a plane, train, and some marine vessels during that period.

“We consider that the ‘conscientious objection’ raised by the above considerations is a reason enough to refuse mRNA vaccines or similar technologies as a preventive treatment against COVID-19,” the authors said in conclusion.

The paper came as another report, from the group Doctors for COVID Ethics, claims to have found “irrefutable proof” that mRNA vaccines cause vascular and organ damage. Meanwhile, several Italian surgeons, while analyzing the blood from a group of roughly 1,000 people who developed symptoms after receiving a Pfizer/BioNTech or Moderna mRNA injection, have found “metal-like objects” in 94 percent of those individuals.