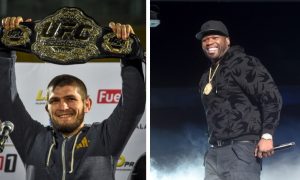 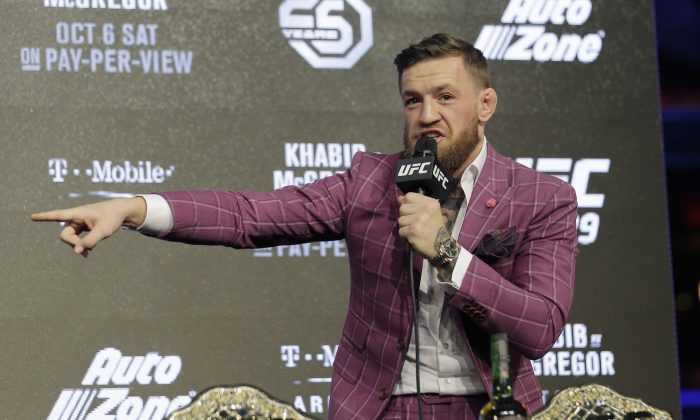 Conor McGregor said he was in the wrong after a video emerged showing the mixed martial arts fighter punching a man in a pub in Ireland.

The incident occurred on April 6 at the Marble Arch Pub in Dublin.  Earlier in August, TMZ published footage of the altercation, which appears to show an older man refusing a drink McGregor had placed in front of him at the bar before the former UFC World Champion punches the man in the head.

In an interview with Ariel Harwani on ESPN, McGregor admitted he was “in the wrong.”

“In reality, it doesn’t matter what happened there. I was in the wrong. That man deserved to enjoy his time in the pub without having it to end the way it did,” McGregor said, adding he had tried to make amends around the time of the incident. “But that does not even matter. I was in the wrong.

“That’s not who I am. That’s not the reason why I got into martial arts or studying combat sports. The reason I got into it was to defend against that type of scenario. I have been continually making steps to do better and be better.

“I’m just here to own up to that and move on and carry on and face what’s coming with it.”

The incident is the latest violent spout that McGregor has engaged in outside of the boxing ring.

Footage of the Altercation

Security footage published by TMZ shows McGregor walking into the bar, with mostly white-haired older men sitting there drinking. McGregor appears to pour out multiple glasses of an alcoholic drink. It looks like he is trying to give men glasses of his signature Proper No. Twelve whiskey.

A man sitting to Conor’s right moves the glass McGregor sets out away from him. McGregor slams another glass in front of him, which he also moves away. McGregor appears to be saying something to the man, with younger men standing between and around them. It’s not clear if the younger men are his security guards or just other bar patrons.

McGregor then punches the older man’s head. The younger men pull McGregor away. Security footage obtained by TMZ appears to be cut at certain points, and there is no audio, so the situation isn’t fully clear.

UFC lightweight championship belt holder Khabib Nurmagomedov, who defeated McGregor at their last fight, said McGregor must face consequences in the wake of the video of the altercation.

“This is like really really bad thing. Even if old guy like this guy on video, even if this guy punch your face ten times, you can’t punch this guy’s face. You can’t. This is like impossible. We have to respect old people,” Nurmagomedov told TMZ in an interview published on Aug. 16. “I think like these people have to go jail, brother. They have to go jail.”

“This is very bad for sport. Something he doing good for sport, but right now he without his mind. He lose his mind,” the Russian fighter added. “If today he punches old guy, what’s going to happen tomorrow? Nobody know this.”

American UFC welterweight fighter Jorge Masvidal, who recently made the record books for delivering the fastest knockout in UFC history, also spoke about the matter.

“I don’t know what happened there but it didn’t look right. That dude is maybe like 60-years-old and you punch him in the head and he wasn’t looking at you? I don’t know how that sits with me,” Masvidal told Submission Radio in an interview published on Aug. 15. “I want to know more about it because all I saw was a quick clip of the video. And, it just didn’t make no sense.

“I don’t know maybe this guy disrespected Conor, spit on him, or some [expletive] that I didn’t see on the camera, but the 10-second clip that I saw just didn’t look right.”

“I just want to know what the guy said, honestly. Obviously, don’t hit people in the face, but I am a fighter and I know how drunk people treat us,” Pettis told MMA Fighting earlier this month. “We’re so accessible to people. We’re not like NBA, NFL athletes where we have this huge entourage. UFC puts us out in front of everybody.”

Police have not arrested McGregor. He previously faced charges for knocking the phone out of the hands of a fan who was recording him and stomping on it, in a Miami incident that happened a month before the altercation at the Irish pub. Charges were dropped but McGregor settled a civil suit with the owner of the phone, TMZ reported.

Last year, McGregor threw a dolly at a bus carrying UFC fighters in Brooklyn, New York. The windows were smashed and fighters onboard received injuries, with some even being pulled out of upcoming fights because of injuries from the broken glass, ESPN reported.

McGregor managed to avoid felony charges in that incident.