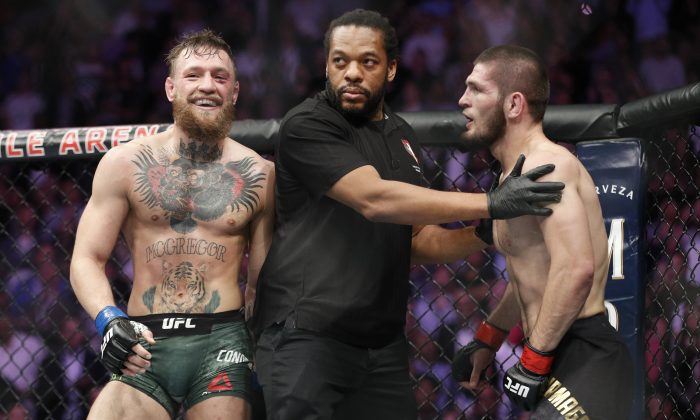 Conor McGregor Backtracks on Retirement Claim: ‘See You In The Octagon’

Conor McGregor appears to have backflipped on earlier claims he was retiring from the UFC, teasing on Twitter, “Now see you in the Octagon.”

I want to move forward, with my fans of all faiths and all backgrounds.
All faiths challenge us to be our best selves.
It is one world and one for all ❤️
Now see you in the Octagon.

The Irish MMA superstar sent the world of combat sports into a frenzy when he announced at the end of March that his days inside the Octagon were coming to an end.

McGregor’s retirement could be over before it began, though, judging by his most recent tweet, which also contained a reference to a desire to “move forward, with my fans of all faiths and all backgrounds.”

The message appears to segue off an earlier set of tweets of McGregor’s—since deleted but preserved in a screenshot—that poked fun at Nurmagomedov’s cultural traditions.

“Your wife is a towel, mate,” McGregor wrote in apparent ridicule of a photo showing Nurmagomedov sitting beside his wife, who wears a full head covering.

Nurmagomedov then blasted McGregor in a tweet of his own, saying, “Rapist, you are Rapist. You are a hypocrite who is not responsible for your actions. Justice will find you.”

Rapist, you are Rapist. You are a hypocrite who is not responsible for your actions. Justice will find you. We will see.@TheNotoriousMMA pic.twitter.com/317rLK5TVN

The Russian fighter’s message was an apparent reference to recent allegations against McGregor of sexual assault.

Shortly after McGregor announced his retirement in March, The New York Times reported that he was under investigation for allegedly sexually assaulting a woman in Dublin, Ireland, in December.

According to Bloody Elbow, an MMA news service, McGregor was arrested in January, questioned, and released. He has not been charged in connection with the allegations.

Bad blood between the two fighters is a well-documented fact.

A massive brawl that spilled into the crowd followed McGregor’s fourth-round loss to Nurmagomedov at UFC 229 in Las Vegas. Both fighters were later hit with suspensions.

Earlier McGregor pleaded guilty to a single violation of disorderly conduct in a Brooklyn criminal court last July in connection with an incident in which he and members of his entourage in April attacked a bus carrying Nurmagomedov and other UFC fighters.

The plea deal saw McGregor receive five days of community service and having to take part in an anger management program.

“I just want to say I’m thankful to the DA and the judge for allowing me to move forward,” McGregor said in a statement outside the courthouse, ESPN reported. “I want to say to my friends, my family, my fans—thank you for your support.”

Meanwhile, McGregor’s original retirement announcement was met with skepticism from UFC boss Dana White, who was reported by Yahoo Sport as saying that fans should not consider McGregor to be retired from the UFC just yet.

“I think there’s some things that Conor wants. I think that Conor wants to get together, face-to-face, he and I, and we probably will in the next couple of weeks to get this thing figured out,” White said in an April 1 interview with KLAS-TV in Las Vegas, according to Yahoo.

“He’s stuck on this thing where he wants a piece of the ownership. I think there’s other ways we can make him happy.”

Hours before making his retirement announcement, McGregor appeared on the Jimmy Fallon show, saying, “I am set for life, my family is set for life.”

“I’ve done a lot, I’ve fought a lot. I’ve never pulled out of contests. I’ve gone through some crazy injuries, some crazy external situations that many a man would sprint for the hills if it happened to them.

“But I stood firm [and] done my piece for the company. Like I said, this whiskey [one of McGregor’s business interests] is my baby. I have a lot of great entities. I don’t necessarily need to fight.”

McGregor’s March retirement announcement was not the Irish fighter’s first.

He first dropped the hint that he was considering early retirement by writing on Twitter in 2016, “I have decided to retire young. Thanks for the cheese. Catch ya’s later.”