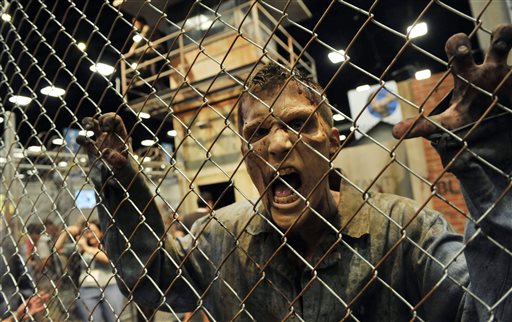 The Pentagon apparently has a document–called CONOP 8888–that talks about countering a zombie apocalypse.

The Defense Department has a plan to “preserve the sanctity of human life” among “non-zombie humans” if an incident were to occur, according to Foreign Policy. The document talks about isolating the threat of chicken zombies, vegetarian zombies, and “evil magic zombies.”

“This plan fulfills fictional contingency planning guidance tasking for U.S. Strategic Command to develop a comprehensive [plan] to undertake military operations to preserve ‘non-zombie’ humans from the threats posed by a zombie horde,” reads CONOP 8888. “Because zombies pose a threat to all non-zombie human life, [Strategic Command] will be prepared to preserve the sanctity of human life and conduct operations in support of any human population — including traditional adversaries.”

The document also entails preventing threats from life forms “created via some form of occult experimentation in what might otherwise be referred to as ‘evil magic,’ to vegetarian zombies that pose no threat to humans due to their exclusive consumption of vegetation, to zombie life forms created after an organism is infected with a high dose of radiation are among the invaders the document outlines.”

The plan also spells out that when dealing with zombies, it’s best to aim for the head, namely the brain.

Officials familiar with the plan told CNN that “zombies” were chosen due to the outlandish nature of the premise of the attack.

“Training examples for plans must accommodate the political fallout that occurs if the general public mistakenly believes that a fictional training scenario is actually a real plan,” the document reads. “Rather than risk such an outcome by teaching our augmentees using the fictional ‘Tunisia’ or ‘Nigeria’ scenarios used at (Joint Combined Warfighting School), we elected to use a completely impossible scenario that could never be mistaken as a real plan.”