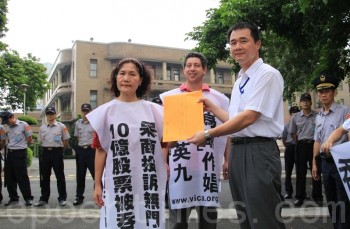 Ding Xuyun (L), a victim of a business con in mainland China, and others protest in front of Taiwan Legislative Yuan on Sept. 2. (The Epoch Times)
China

TAIPEI—With an agreement between Taiwan and China to protect the interests of Taiwan’s businesspeople on the mainland soon to be signed, a businesswoman who lost everything in investments on the mainland has stepped forward asking her government not to play the part of a fool. She is one of 10,000 similar cases, according to a Taiwan NGO.

Ms. Ding Xuyun protested in front of Taiwan’s Legislative Yuan (Taiwan’s legislature) on Sept. 2. Ding believes that signing such an agreement would give Taiwan’s businesses a false sense of security. “This is just wishful thinking,” she said. “It will only cause more businesses to fail.”

Before any new agreements are considered, Ding says previous cases should be resolved. Her own efforts to gain legal redress in China and her appeals to authorities in China and to Taiwan’s mainland affairs council have led to dead ends.

Ding sees the Chinese Communist Party as the ultimate culprit and says she has stepped forward to warn those in a democratic society about it.

“[Taiwan’s] President Ma needs to be vigilant. The government must take tough measures to protect the Taiwanese people against the Communist Party’s liars,” she said. “They are crooks and robbers.”

Ding said that in 2008, she bought 10.1 million shares in a jewelry producer, Eastern Gold Jade Company, at the price of 5.5 yuan (US$0.86) per share from Wu Zhengxin, a resident of Hubei Province in China. The total investment was over 50 million yuan (US$7.8 million).

Later, when gold prices surged, Wu reneged, and colluded with Wang Chaoyang, a notary public in Wuhan, Hubei, to produce fake documents. Then Wu and a friend of his at the People’s Court used their power to auction off the gold shares that should have belonged to her.

Based on the price of gold on Sept. 2, 2011 (the day Ding protested in front of legislative Yuan), which works out to 22 yuan (US$3.44) per share, Ding missed out on millions of American dollars in the transaction.

After three years of pursuing her case, Ding said that she was rejected by everyone.

Her case was not accepted by the Public Security Bureau in Wuhan.

Director Liu Jianzhong of the Taiwan Affairs Office of the State Council in China told her, “This has nothing to do with me. Go talk to Hu Jintao yourself!”

When she sought help from the Mainland Affairs Council in Taiwan, she was told that the director was busy and could not see her.

Adding injury to financial insult, on Aug. 5, 2009, Ms. Ding was beaten by a security guard at the notary’s office, suffering injuries from which it took her more than one year to recuperate.

That very same day the Straits Exchange Foundation had sent a request to the Association for Relations Across the Taiwan Straits to assist with the investigation and to protect Ding’s personal safety.

Ms. Ding said that she was conned in all three investments she made in China. “I have nothing left.”

She suspects she is barred from traveling to China again, but she doesn’t really want to go anyway, since she believes her life could be in danger at any moment.

Taiwan’s Deputy Mainland Affairs Minister, Liu Te-Shun, claimed in a press conference several days ago that the new agreement would be strenuously upheld after it was signed and would not be relegated to the bookshelf. Many Taiwanese, particularly the victims of Chinese businessmen, are skeptical.

William Gao, chairman of Taiwan’s Victims of Investments in China Association, said that the problem is that the Chinese regime has no real desire to solve the problem. There have been cases that Taiwanese businessmen have won in higher courts, but the verdict was not implemented by local law enforcement authorities, Gao said.

In a Radio Free Asia interview, Gao said that there is a backlog of over 10,000 cases similar to Ding’s, and that without solving those problems first, signing the agreement will only help the Chinese regime’s propaganda.

Ding urged President Ma to be vigilant and to learn from the disastrous experiences suffered by Taiwanese businesses.

“Don’t be a fool and try to curry favors from the Communist Party,” she said. Although Ma may not have ill intentions himself, she believes his naiveté may lead him to be complicit in crimes.