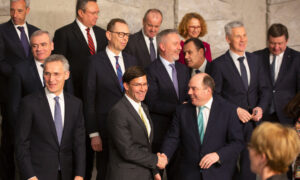 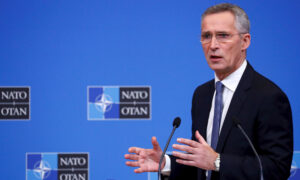 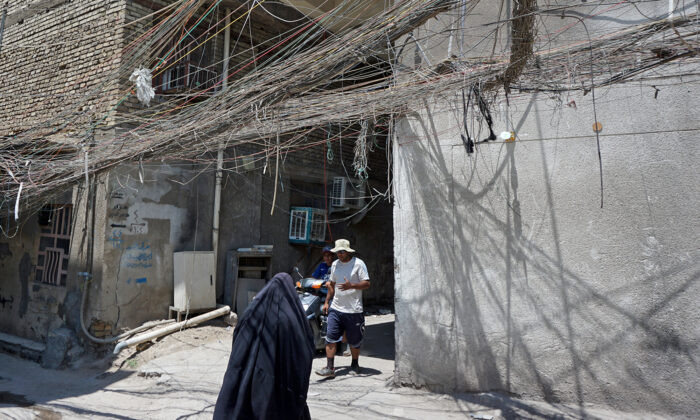 Iraqis walk beneath a web of electric wires in the Syed Sultan Ali area of the capital Baghdad, on July 13, 2020, used to draw electricity from private generators due to an unreliable national electricity supply amid high temperatures. (SABAH ARAR/AFP via Getty Images)
Middle East

The Trump administration is trying to support Iraq in developing good relationships with the Gulf countries to help it meet its energy needs and to reduce its dependence on Iran.

That way the United States isn’t only helping Iraq reduce Iranian influence and build better relationships to meet its energy and economic needs, but by doing so is also drawing Iraq closer geopolitically, experts say.

Esra Serim, a doctoral candidate in political science at Aix-Marseille University in France, told The Epoch Times in an email that the Trump administration thinks that Iraq should reduce its energy dependence on Iran, and because of that, it pushes both Iraq and the Gulf Cooperation Council (GCC) toward each other.

“Recently, the U.S. fully backed a plan to connect Iraq to the GCC electric grid and mediated between Baghdad and six Arab Gulf countries, Saudi Arabia, Kuwait, Bahrain, Oman, Qatar, and the UAE, to reach an agreement. This plan means that Iraq’s electric capacity will increase dramatically,” Serim said.

Iraq’s state coffers were drained because of an economic crisis spurred by falling oil prices and the pandemic, leaving little for investment to maintain the country’s aging electricity infrastructure.

In the scorching summer months in the country’s oil-rich south, where temperatures topped 125 degrees Fahrenheit (52 degrees Celsius) in early August, people were left with painful new choices in the age of the pandemic: Stay at home in the sweltering heat with no electricity for hours, or go out and risk the virus.

The project of the Gulf Cooperation Council Interconnection Authority (GCCIA) to connect the electric grids of Iraq with GCC aims to provide electricity to the suffering people of Iraq, mostly in the southern provinces, according to a joint statement released by the United States, GCC, and the Republic of Iraq on July 16.

“The Government of Iraq, Gulf Cooperation Council, and the United States look forward to increased close economic and energy cooperation between the United States, Iraq, and the GCC countries, as a basis for peace, development, and prosperity in the region,” the State Department said in the statement.

In a recent development, UAE has offered to provide Iraq with electricity for more than $1 per kilowatt, which Iraq currently imports at more than $5 from Iran, according to Maan Habib, a news anchor with AlhurraIraq, an Iraqi TV channel.

Yezid​ Sayigh, a senior fellow at the Carnegie Middle East Center, told The Epoch Times in an email that the United States is using two issues to draw Iraq into a closer geopolitical relationship.

“A serious problem that Iraq faces in electricity supply, and the U.S. interest in Iraqi energy,” said Sayigh, who’s based in Beirut.

While Iraq is the second-largest oil producer after Saudi Arabia in the Organization of the Petroleum Exporting Countries (OPEC), it’s forced to import gas and electricity from Iran because its electricity sector can’t meet demand due to lack of investment and rehabilitation, according to The Arab Gulf State Institute (AGSIW) in Washington.

“But first and foremost, the U.S. administration is using these two issues to try to draw Iraq into a closer geopolitical relationship. Integrating Iraq into GCC electricity networks is a way of cementing a strategic reorientation, as leaving the grid at a later date would be costly,” Sayigh said.

When a high-level Iraqi delegation led by Prime Minister Mustafa Al-Kadhimi met with the Trump administration on Aug. 19 and 20 in Washington, the issue of connecting Iraq with the electric grid in the Gulf countries was discussed again.

Ranj Alaaldin, a visiting fellow at the Brookings Doha Center, said in an analysis published on Aug. 19 that the relationships between Iraq and the Gulf countries haven’t been good, due to a complex array of factors.

“With U.S. support and leadership, Iraq can become re-integrated into the Arab world, re-invigorate a relationship with the Gulf that is based on mutual interests to help revive the Iraqi economy, and reduce its dependence on Iran in the process,” he said.

Serim said the Iraqi government also is eager for the United States to play its role in restoring its ties with the GCC.

“Creating a set of economic/financial and diplomatic incentives between Iraq and the GCC would pave the way for overcoming their past conflicts and seducing more American allies to invest in Iraq, and will also help to alienate Iraq from Iran,” Serim said.

Alaaldin said the U.S. administration should create a framework to give direction to the Iraq–GCC relationship.

“What the U.S. can and should devise is a set of guiding principles, a framework for forging what would effectively be a U.S.-GCC axis in Baghdad and a GCC-aligned political coalition in Baghdad that creates a sense of direction and a synergy between the extensive ties that some political actors already have with the Gulf,” he said.

Serim said applying pressure and sanctions on Iran is “lying at the bottom” of the U.S. project to connect Iraq with the Gulf electric grid.

“Because U.S. sanctions forbid other countries from purchasing Iranian energy, except for when a waiver is provided [when asked from Washington],” said Serim.

Kate Dourian, a non-resident fellow at the AGSIW, wrote in an analysis that Iraq’s reliance on Iran for energy is challenging because it needs to apply for waivers from sanctions imposed on Iran.

“Waivers have been granted on the condition that Iraq increases its efforts to attain energy self-sufficiency,” she said.

The State Department in March designated 20 entities for diverting funds from the Iraqi economy to Iran’s Islamic Revolutionary Guard Corps-Quds Force, saying that these entities undermine the Iraqi government’s efforts for “energy dependency” by increasing its reliance on electricity imports from Iran.

“Under a U.S.-issued sanctions waiver, Iraq is permitted to engage in financial transactions related to the import of electricity from Iran. The purpose of this waiver, which the United States is renewing today, is to meet the immediate energy needs of the Iraqi people,” department spokesperson Morgan Ortagus said in the same statement.

After the recent second round of strategic talks between the United States and Iraq last week, the Iranian regime called Iraqi Prime Minister Mustafa Al-Kadhimi a traitor and said that he betrayed “Qasem Soleimani’s sacrifice,” according to the Utv Iraq.

Sam Bazzi, an independent Middle East expert and the founder of the Hezbollah Watch project, told The Epoch Times in a chat message that in its recent message, the Khamenei regime compared Kadhimi with the men who “betrayed Imam Husayn” in Iraq 14 centuries ago.

“This is a severe insult,” Bazzi said, adding that it’s an indirect death threat to Kadhimi.

“The United States can help in paving the way for its regional friends and allies to enhance existing, and establish new, commercial ties with Iraq, and participate in the development of Iraqi infrastructure and industry as an alternative to relying on Iran and China, but the success of such an undertaking remains dependent on the cooperation of the Iranian regime and the pro-Tehran Khomeinist Iraqi militias,” Bazzi said, in explaining the persisting challenges.

Linking Iraq with GCC will help, but the United States needs to be mindful that the Iraqi society is in a very unhealthy state, Alex Vatanka, the director of the Iran Program at the Middle East Institute in Washington, told The Epoch Times over the phone.

He said it’s ideal to want Iraq to have healthy relationships, but, currently, the entire Middle East is mired with competing states.