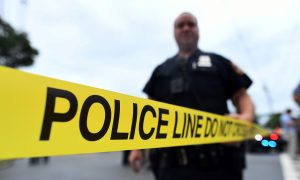 The sister of a 13-year-old Connecticut girl who was raped and killed by a gang of eight people over two decades ago is outraged that one of the people convicted in connection with the killing is now getting released from prison.

Maryann Measles, a seventh-grader from New Milford, was about to make statutory rape allegations against two men when she was kidnapped, beaten, gang-raped and drowned. Five men and three women were involved in the crime, including Maggie Mae Bennet, who is scheduled to be released Oct. 10 after serving 17 years of a 19-year sentence for conspiracy.

According to The News-Times of Danbury, Bennett has earned early release due to good behavior.

The ringleader of the group who murdered Measles accepted a plea bargain that spared him from the death penalty and saw him imprisoned for 60 years without parole.

“I Alan M. Walter Jr. accidentally killed Maryann Measles on Sunday, October 19, 1997,” Walter is quoted as telling state police, the Hartford Courant reported. “A couple of days before Maryann was killed, I found out from Dean Dupas that Maryann had filed rape charges against me. I told Dino [Dean] that we have to scare Maryann, the ‘Sicilian way’; that’s putting someone’s head under water and holding them until they talk.”

The victim’s mother, Cindi Measles, said she was satisfied with the outcome, as she said execution via lethal injection would be insufficient punishment.

“It’s too easy,” Measles said after the Walter’s hearing, according to the News-Times.

Other defendants still serving time in prison include Keith Foster, who received a 110-year prison sentence, and Deaneric Dupas who was sentenced to 47 years in prison, according to the New Milford Spectrum.

Last year Bennett petitioned the board for early release but was denied, according to the New Milford Spectrum. At the time, Litchfield State’s Attorney David Shepack argued against Bennett’s early release, saying that “the fact is the sentences reflect the seriousness of what was a particularly heinous crime.”

Bennett had received the shortest prison sentence of all the defendants after agreeing to cooperate with investigators. She testified in court in 2002 that she thought the plan was to intimidate Measles so she would not make statutory rape reports. Bennett testified she did not know that the gang planned to kill Measles.

The 13-year-old victim went missing while at a grocery store with her mother and six months passed before her body was found in a lake, wrapped with a blanket and chains.

According to arrest warrant affidavits cited by the Hartford Courant, Measles’ murder was a terrifying event in which she pleaded for her life.

“Dupas explained that Walter choked the victim, after which she was wrapped in the blanket and chains, then thrown into the water still alive by Walter and Dupas,” state police wrote in an affidavit cited by the publication.