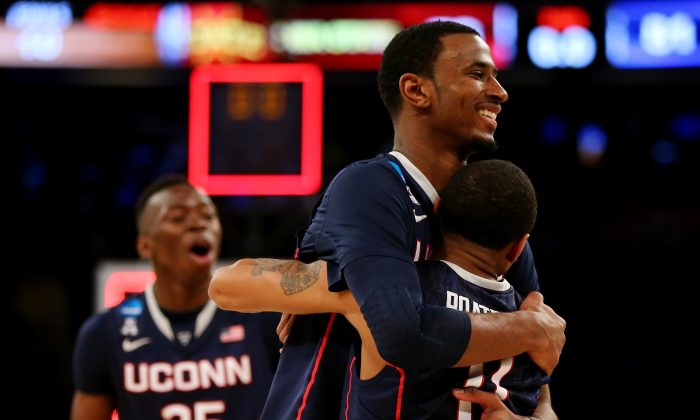 The Connecticut Huskies take on the Michigan State Spartans in the Elite Eight on March 30.

UPDATE: The Huskies won by 60-54 in a close game that was decided in the final minutes.

Connecticut will take on No. 1 Florida on April 5.

The teams are playing at Madison Square Garden in New York City.

It will be broadcast on CBS. Live streaming will be available via NCAA.com.

No. 7 Connecticut beat No. 3 Iowa State in the Sweet Sixteen while No. 4 Michigan State beat No. 1 Virginia.

Adreian Payne #5 of the Michigan State Spartans reacts after hitting a three pointer late in the game against Virginia Cavaliers during the regional semifinal of the 2014 NCAA Men’s Basketball Tournament at Madison Square Garden on March 28, 2014 in New York City. (Elsa/Getty Images)

Michigan State gets its timing back just in time

NEW YORK—Michigan State guard Keith Appling drove the lane one day in practice and flipped a lob to Branden Dawson as he had many times before.

Appling figured the injury-riddled Spartans would rekindle their chemistry sooner or later. But there isn’t much of a later in the final days of the regular season.

Just in time, Michigan State got its timing back. The Spartans (29-8) are one win away from their seventh Final Four in 16 seasons.

They face UConn (29-8) on Sunday at Madison Square Garden in the East Regional final, a scene hard to envision when Michigan State lost seven of 12 to close the regular season.

Not that the reasons were a mystery. Appling missed three games in February with a sore right wrist. Dawson sat out nine with a broken right hand. Big man Adreian Payne was sidelined for seven with a sprained right foot.

“Once you get everybody back, you kind of expect it to go smoothly like it was before,” guard Gary Harris said of a team that started 18-1.

Instead, the Spartans lost at home to Illinois on March 1 in their first game at full strength.

It made sense to coach Tom Izzo that the lack of continuity would make for a ragged offense. He reminded his players that the Oklahoma City Thunder dropped three in a row after star point guard Russell Westbrook returned from injury last month.

What Izzo didn’t realize at first was how much the shuffling would hinder their trademark defense, too.

With Dawson and Payne’s athleticism, Michigan State can switch on screens. Izzo tweaked his strategy when they were out, and it took a while to readjust after they came back.

Once the Spartans’ defense improved, their rebounding improved.

“I think we got our identity back,” Izzo said.

They beat Wisconsin and Michigan, two teams that have also reached the regional finals, to win the Big Ten tournament. Suddenly Michigan State was an NCAA tourney favorite despite being seeded fourth.

“There were people putting a fork in us, and then two weeks later the president’s picking us to win the whole thing,” Izzo said about Barack Obama’s bracket for ESPN.

The Spartans showed why by beating top-seeded Virginia on Friday in the sort of gritty, physical game Michigan State has so often won in March. Still, Izzo isn’t sure this group quite has the edge yet “that just refuses to lose” of some of his past teams — Appling is the guy who can provide that, and he’s not 100 percent.

Since Izzo took over in 1995, every player he’s recruited who stayed four years has reached a Final Four. If the Spartans lose Sunday, Appling and Payne would be the ones who snapped that streak.

To Izzo, players accept that pressure when they sign with Michigan State.

“I’m hoping for true competitors,” he said. “Fear drives us all.”

Appling chose Michigan State because the program was coming off two straight Final Four trips. He pushes himself at practice every day by reminding himself of that streak.

UConn was barred from last year’s tourney because of previous low scores on the NCAA’s academic progress measure. Ineligible for any championships, the Huskies opened last season against Michigan State in Germany in coach Kevin Ollie’s first game after Jim Calhoun’s retirement.

UConn upset the 14th-ranked Spartans that day. Izzo could tell “Kevin’s teams are going play hard and will play disciplined.”

All those practices when the Huskies supposedly had nothing to play for are now rewarded by victories in the biggest games.

“That’s what faith is all about,” Ollie said. “When you can’t see it, you still got to believe it. Most of the time we couldn’t see it last year.

“But we knew we were continuing to plant seeds, and sooner or later it was going to be that right time when we were going to be ready for this moment.”