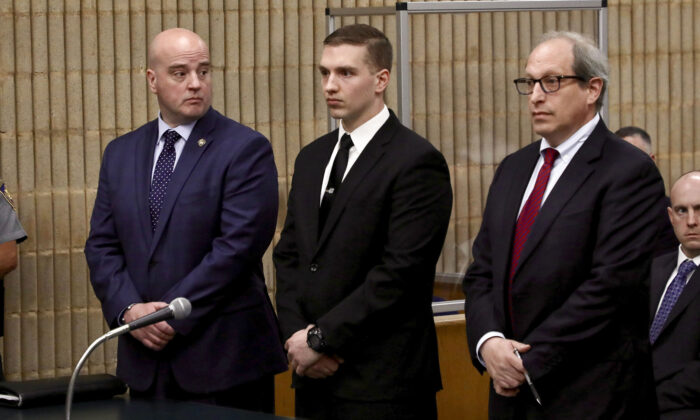 MILFORD, Conn.—A Connecticut state trooper who killed a 19-year-old man while firing seven gunshots into the driver’s window of a stolen car in 2020 pleaded not guilty to a manslaughter charge Thursday.

Trooper Brian North made a brief appearance in Milford Superior Court as relatives of Mubarak Soulemane repeated their calls for North to be convicted and fired. North remains free on bail but is on paid administrative leave with his police powers suspended pending the outcome of the criminal case.

North did not comment while leaving the courthouse with about a dozen off-duty law enforcement officers who were there to show their support for him, a smaller group than the one that attended his first court appearance last month.

Soulemane’s mother and other relatives and supporters shouted “Justice for Mubarak,” “No justice no peace” and “Fire Brian North” outside the courthouse.

Soulemane was shot on Jan. 15, 2020, as he sat in the driver’s seat of a stolen car in West Haven, after a nearly 30-mile (48-kilometer), high-speed chase from Norwalk on Interstate 95. Other officers had broken the front passenger door window and fired a stun gun at Soulemane, but it did not work.

An investigation showed Soulemane had a knife but was boxed in by police and unable to drive away.

State Inspector General Robert Devlin found the shooting was not justified. North said in statement to investigators that he believed he was protecting officers on the other side of the car from possibly being attacked by Soulemane when he opened fire.

Soulemane’s family said he had schizophrenia and his mental health appeared to be deteriorating in the days before the shooting.