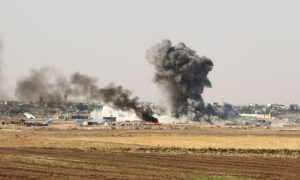 A 22-year-old U.S. citizen from Connecticut who said he wished the United States would “burn in fire” has been arrested, according to the Department of Justice.

Federal officials said Ahmad Khalil Elshazly was planning to join the ISIS terrorist group after going to Turkey on a cargo ship, allegedly because he was concerned about being caught by police at an airport.

“As alleged in the complaint, Elshazly was bent on supporting ISIS,” stated John C. Demers, Assistant Attorney General for National Security. “Worried that his efforts here would be too small and that he would be stopped at the airport, he planned to travel overseas aboard a container ship to join and fight for ISIS.

“The National Security Division is committed to identifying and holding accountable those who continue to seek to provide material support to foreign terrorist organizations,” Demers added.

The criminal complaint alleges that Elshazly said in a meeting with other people in October, “I want to go to the caliphate and fight there. I can kill maybe … like a hundred kaffir. I can kill them. A hundred kaffirs.

“If I do something here how many kaffirs could I kill? One, two, three and then I get shot and I die. It is more benefitting if I go there, I could kill more and will get more faithful rewards.”

In the same meeting, Elshazly allegedly made other alarming comments: “They say, war has started and we are marching to it …. but all doors are closed, closed. I am talking to myself now, asking myself, How do I get there? How can I help Muslims? How can I do anything?”

He further stated, “God willing! May this country [United States] burn the same way they burned Muslims! May they burn in fire at the end!” he said. The meeting was held in a public venue. When he was asked to lower his voice, Elshazly proclaimed, “I am not scared.”

The complaint further alleges that this month, Elshazly sent a series of YouTube videos to another person explaining how numerous firearms and other weapons work.

“The National Security Division is committed to identifying and holding accountable those who continue to seek to provide material support to foreign terrorist organizations,” Demers said.

Elshazly is facing up to 20 years in prison, he is currently being held federally without bail in New Haven.