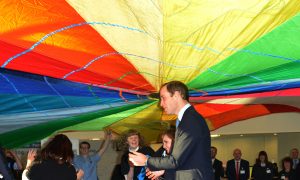 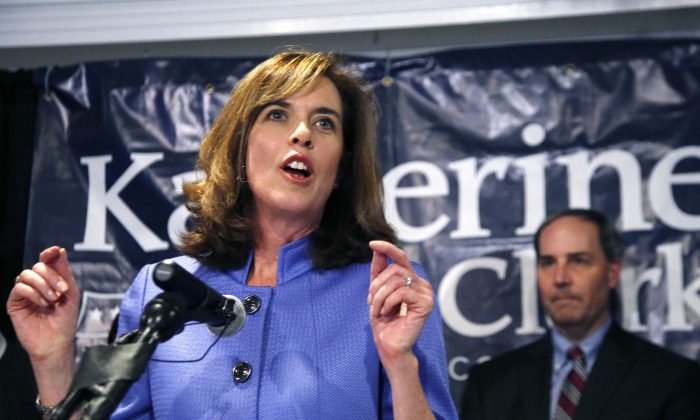 Katherine Clark (D-Mass.) has solicited the help of Congress, the FBI, and the Department of Justice (DOJ) in prosecuting elements of the online social movement known as Gamergate, which had allegedly harassed one of her constituents.

This week, Clark wrote a letter urging fellow members of the House Appropriations Committee to address the Gamergate issue by pressuring the DOJ to increase its prosecution of cyber-crimes such as the online harassment of women.

“‘Gamergate’ has been marked by threats of murder, rape, violence, and severe harassment of female participants in the video game industry,” Clark wrote. “These threats have not only impacted these women’s lives and their ability to work, they have the potential to silence female voices and deter young women from entering their chosen profession.”

Gamergate’ has been marked by threats of murder, rape, violence, and severe harassment of female participants in the video game industry
— Rep. Katherine Clark

Clark asked the committee, a crucial checkpoint in the funding of the federal government, to insert a paragraph in its report to the DOJ demanding that more of these cyber-crimes be prosecuted.

“The Committee strongly urges the Department to intensify its efforts to combat this destructive abuse and expects to see increased investigations and prosecutions of these crimes,” the paragraph concludes.

One of the most prominent figures in the Gamergate saga has been Brianna Wu, a Boston-based video-game developer who has allegedly suffered a continuous wave of harassment from members of Gamergate. Clark is Wu’s congresswoman, and her office has reached out to Wu in response to the reports of harassment, Clark told Jezebel. Clark has also contacted the FBI to check how proactive their efforts are in combating cyber-crime.

“Just last week, someone threatened to bomb an industry conference if developer Brianna Wu, a game developer, who has courageously stood up to online death threats, participated,” Clark wrote in an online editorial. “This threat was reported, but unbelievably it did not violate the site’s terms of service.”

Clark’s overtures marks the first time an elected official has addressed the issue of Gamergate. Twitter, which serves as the location of much of the activity of Gamergate, has recently taken action to redress online harassment on its platform, although it has avoided name-checking Gamergate.

Twitter’s CEO recently said in a memo that the company “sucks” at dealing with “abuse and trolls on the platform,” and two weeks ago Twitter announced that it was making a number of reforms to how it handled online harassment, including tripling the number of team members who deal with reports of abuse and allowing bystanders to report rule violations.

Self-described Gamergate proponents on Twitter seem undeterred by Clark’s efforts, maintaining that the online movement has committed no crimes.

@Zhou___ not sure how it works on your side of the pond, but in the UK you have to have done something illegal before you get prosecuted

@Zhou___ @RepKClark Let the FBI investigate. It's their wasted time. I don't mind paying officers to do this.

A blog post written by Eron Gjoniis in August is widely credited as providing the spark that ignited the virtual conflagration known as Gamergate. Gjoniis accused his ex-girlfriend Zoe Quinn, a game developer, of committing infidelity with reviewers on popular gaming websites. The post went viral in certain segments of the online gaming community, reportedly triggering a wave of vitriol against Quinn that graduated into people hacking her account and sending her death threats.

Many reports of harassment allegedly misrepresented the sequence of events following the fallout from Gjoniis’ blog post, and many in the pro-Gamergate camp maintain that the movement’s main concern is ethics in video gaming journalism, tweeting with the #gamergate hashtag, under which millions of tweets have been sent out since the beginning of the controversy.

In the ensuing months, female game developers and critics of Gamergame have reported retaliatory online harassment for speaking against the movement, although such allegations have often been disputed as false flag operations meant to smear the movement. That fact that most, if not all, of the threats are made under anonymous social media accounts have made these claims difficult to verify.

In turn, proponents of Gamergate have also claimed they’ve been victimized by online harassment, death threats, and the leaking of personal information. Milo Yiannopoulos, a Breitbart columnist and one of few reporters willing to write in favor of Gamergate, tweeted in September that someone had mailed a syringe to his home, followed by a small animal carcass in November.

Many Gamergate proponents have accused media outlets of bias in their reporting on the movement. Reporters have replied in kind, arguing that because Gamergate lacks a formal organizational hierarchy, any reports of its negative elements could be construed as unfair.

After Gawker staff writer tweeted insensitive remarks, Gamergate was able to lobby multiple companies to pull their advertising from Gawker.

“If I’m arguing with someone from the NRA or the NAACP or some other established group, I can point to actual quotes from the group’s leadership. With you guys, any bad thing that happens is, by definition, not the work of A True Gamergater,” Jesse Singal, a writer at New York magazine, wrote in November.

Despite being disorganized, Gamergate has proven deft activism acumen in mobilizing against its harshest critics. After Gawker staff writer Sam Biddle tweeted insensitive remarks on the movement in October, Gamergate was able to successfully lobby multiple companies to pull their advertising from Gawker.

“Ultimately #GamerGate is reaffirming what we’ve known to be true for decades: nerds should be constantly shamed and degraded into submission,” Biddle tweeted, then a minute later he wrote: “Bring Back Bullying.”